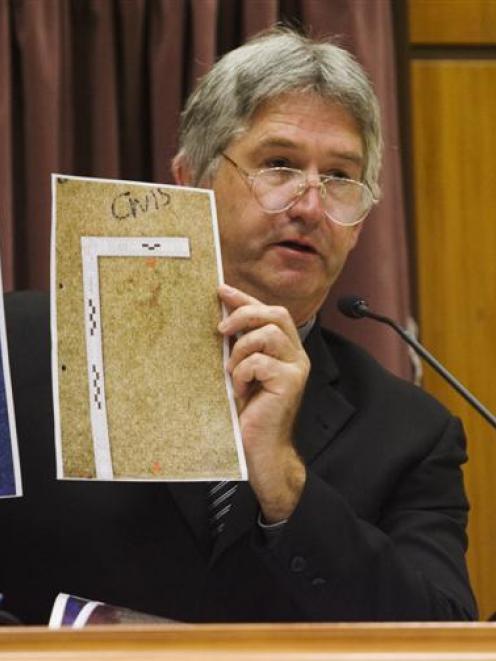 ESR forensic scientist Kevan Walsh gives evidence in the witness stand on bloody footprints and damaged ammunition cartridges.
An ESR ballistics specialist has backed the view of three Crown pathologists that Robin Bain did not commit suicide on June 20, 1994 when he and four of his family were killed in their Dunedin home.

Kevan Walsh told the High Court in Christchurch yesterday he believed the shot that killed the 58-year-old school principal was more likely to have come from a distance of at least 200mm (20cm) than from close range.

Robin Bain, his wife Margaret, daughters Arawa and Laniet and younger son Stephen had all been shot. Police initially considered the case could be one of murder-suicide, but four days later, they arrested the surviving son, David Cullen Bain, and charged him with five murders.

Bain (now 37) denied the charges. He said he found the family all dead when he returned from his early morning paper round.

But he was convicted at the end of a three-week trial in 1995 and sentenced to life imprisonment, with a minimum non-parole term of 16 years.

He served 12 years before being released on bail two years ago after a Privy Council ruling there should be a new trial.

That hearing has now been running for six weeks before Justice Graham Panckhurst and a jury in the High Court at Christchurch. It is expected to run for at least another six weeks.

The Crown says Bain shot four of his family and used his paper round to draw attention away from himself and that he then shot his father from behind a curtain in the front lounge of the Every St property.

But the defence contends it was Robin Bain who shot his wife and three of his children before turning the .22 Winchester rifle on himself.

Much of the scientific evidence in the case is centred on whether the wound to Robin Bain's left temple was inflicted from close range or whether the gun, which was fitted with a silencer, was further away when it was fired.

Mr Walsh, who was not involved in Bain's first trial, was asked in 1997 to review some of the evidence. Part of that review involved test-firing the murder weapon into pork skin which, he said, was recognised as reproducing some of the characteristics of human skin.

In the case of the wound to Robin Bain, Mr Walsh said he was conscious one of the three Crown pathologists, Alexander Dempster, had carried out the postmortem examinations on each of the five victims. And he was aware Dr Dempster believed the shot to Robin Bain's left temple was a close-contact wound.

He had taken Dr Dempster's report into account and had first considered whether the silencer could have been against Robin Bain's forehead when the shot was fired. He was looking at the features mimicking those in the test-firing, in particular intense sooting or darkening around the bullet hole, caused by deposition of soot from combustion by-products.

When he examined the photographs of the wound, he could see some blackening, but it seemed to him to be less than would be expected from a contact shot. And, given the direction of the shot, he believed that part of the wound margin was where the bullet would first make contact so the blackening could simply be the result of "bullet wipe".

He saw no obvious tearing of the skin, often a sign of gas entering the wound. But there were various red marks and what looked like a skin puncture which had the appearance of marks caused by unburned powder particles striking and puncturing the skin surface.

There were similar marks on the pork skin, but from a shot fired from 200mm, not in the contact shot distances.

Mr Walsh said he also saw some features similar to Robin Bain's wound when he looked at Margaret Bain's wound. But there did not appear to be any red marks from powder contact. Darkening around the margin of that wound was more likely to be from "bullet wipe", Mr Walsh said.

His opinion, based on examining the photographs, would be that Mrs Bain was a shot from beyond 200mm.

He believed the shot through Stephen Bain's hand was also from further than 200mm but he could not put a distance on the scalp wound.

He agreed with Dr Dempster's observation that Arawa had been shot while kneeling and he put the range at beyond 200mm.

With Laniet, he agreed the sooting confirmed the wound to her cheek was from relatively close, probably nearer 50mm.

Mr Walsh said he also test-fired the rifle in three different positions to establish an ejection pattern. He had been asked to consider what the pattern might have been if Robin Bain had shot himself on the lounge side of the computer alcove curtains.

He was told a fired cartridge case was found on the floor of the alcove on the other side of the curtains but the rifle was on the floor in the lounge.

The ejection direction depended on the orientation of the firearm, Mr Walsh said.

He tested the rifle in three positions, held horizontally at waist height - about 1200mm above the ground - pointing forwards but not aimed; then with the end of the rifle butt on the ground, first with the trigger forward and then with the rifle rotated.

There was considerable variation in the ejection patterns in the horizontal position although there was a general pattern to the right and rearwards.

In the two other test positions with the butt on the floor, the ejection port was upwards.

The cases were ejected less than when the rifle was held horizontally. They travelled about 1.5m and sometimes as much as 2.5m.

If the rifle was fired on the lounge side of the curtains where it was found beside Robin Bain's body, he believed the ejected cartridge was more likely to have hit the curtain and landed on the floor. But it was possible it could go through a gap and land on the other side or bounce under the curtain.

The ejection pattern of cartridge cases found in Laniet's bedroom was generally consistent with someone firing shots from the side of her bed.

He had some problems with the rifle jamming and had to clear and reload it several times, Mr Walsh said.

Asked about bullets said to be "misfeeds" found in both Arawa's and Laniet's bedrooms and one lying near the rifle beside Robin Bain, Mr Walsh said he believed none had been damaged by being "misfed" into the rifle chamber.

Rather the damage occurred when they were being pushed down into the rifle magazine. Either of the two rifle magazines, the 10-shot, which was on its back edge near Robin Bain and the 5-shot, in the rifle, could have caused the damage.

A bullet in the gun had a slightly flattened area on the rounded nose. He believed that was caused when it was not "chambered" properly.

When he microscopically tested a pair of blood-stained gloves, he found a partially burnt propellant particle on the right glove, supporting the contention the glove was worn by someone firing a gun.

Mr Walsh, who was also trained in shoe and footprint com-parisons did tests to establish what length of print would be made by a 300mm foot (the length of David Bain's) and a 270mm foot (Robin Bain) wearing blood-stained socks.

He went through a more extensive testing process in relation to the 270mm foot. The walking print averaged 282mm and varied between 273mm and 292mm. When the prints were tested with luminol, the ball of the foot and toes were visible, but it was hard to make out the heel portion.

Mr Walsh said he was also asked to examined two spectacle lenses and a set of spectacle frames. The corresponding shape, shading and symbols on the complementary right and left lenses led him to believe they could have been a pair and could have come from the frames he examined.

Mr Walsh will be cross-examined on Monday.