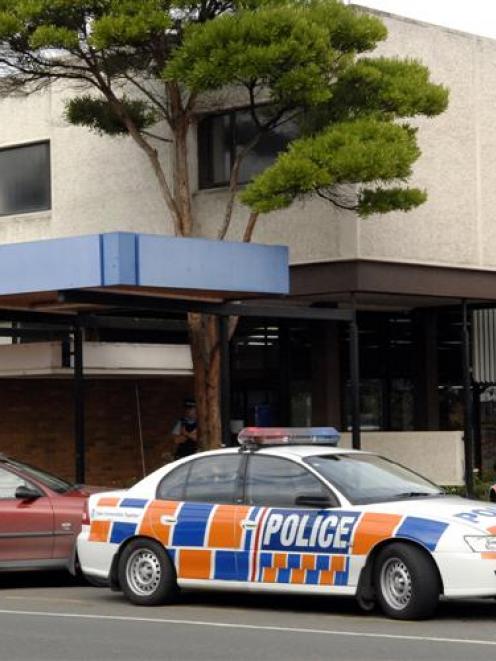 Police investigate the scene of a recent robbery attempt at a BNZ branch.
Dunedin police last night arrested a 32-year-old man in relation to the robberies of six city banks in recent months.

There have been eight bank robberies or attempted robberies in Dunedin and Mosgiel since November, including four in one day on November 29.

Detective Sergeant Chris Henderson, of Dunedin, said the man would appear in the Dunedin District Court today on a single charge of demanding with menaces in relation to the robberies.

Police would seek a remand in custody until Tuesday, when an additional five charges of demanding with menaces would be laid, he said.

The arrest followed the execution of search warrants at three different addresses yesterday.

Some clothing believed to be connected with the robberies was located, he said.

The appearance of the case on Police Ten 7 and other media reports had contributed to the arrest, Det Sgt Henderson said.

"We have had a phenomenal amount of people [contact us], not only from the television, but your paper too."

Twelve detectives had been working on the case, named Operation Hoiho.

Det Sgt Henderson said police would continue to work closely with banks and other financial institutions to increase security measures and develop strategies.