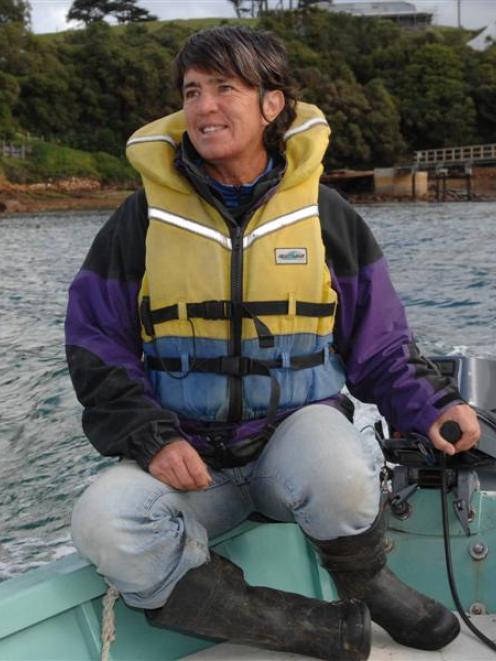 Kathy Morrison
When Kathy Morrison took over as caretaker of Otago Harbour's Quarantine Island 12 years ago she was prepared for anything.

Kathy Morrison is coming out of Quarantine after 12 "special" years. It will be a difficult parting, she tells Allison Rudd.

But even she was surprised to find herself one day stripping naked and swimming to the island's motor boat.

Fred, a friendly sea lion and regular visitor, had made himself at home on the jetty and would not let her past.

"I had to get to the boat so the only way was to swim. I'm not sure who was more surprised when I stripped off - Fred or me.

"He was staring at me in amazement. I guess animals must think it is weird we humans shed things when they don't."

Today, Ms Morrison will farewell Fred and the multitude of other animals, birds, marine life and people who have shared her harbour sanctuary.

After one more five-minute boat ride across the harbour to the Portobello "mainland", she will hand over her role to Graeme Furness and Anna Wiles.

Parting will be difficult.

"This is a very special place," she says, indicating the jetty and foreshore and the expansive view towards Taiaroa Head.

But she won't be severing all ties.

Her pet donkey and seven pet sheep are staying behind, and she will visit them regularly.

Originally, Ms Morrison, her schoolteacher husband Douglas Black and their then 12-year-old daughter Bryony agreed to fill in as caretakers for three months while the incumbent, Russell Kennett, took a holiday.

She was in the boat, passing a cat in a rat's cage up to her husband, who was on the jetty above, while the family's pet rat sheltered up her sleeve.

"Then the boat wobbled and I fell into the water, rat and all.

"I tried to kick off my gumboots as I began to submerge, with the rat perched on top of my head.

"Douglas didn't know what to save first - the rat or the wife."

After two nights enfolded in the sound of silence, Ms Morrison knew Quarantine Island was where she wanted to be.

Her husband was less sure, she says.

"I grew up in the country, on the hills around Waikouaiti, and Douglas is a Scot from the middle of Glasgow, so he's done pretty well."

Living a boat ride away from civilisation has had its moments though.

Ms Morrison recalls a "pitch-black, wild, crazy-weather night" not long after their arrival.

Mr Black and Bryony were waiting to be picked up from the Portobello Aquarium wharf.

"I was frantically trying to row, but the wind was blowing me towards Portobello. Douglas got worried and called out the rescue boat.

'The family lived virtually permanently on the island for several years, although in recent times Mr Black and Bryony - now a marine biologist - have divided their time between the island and a home in Dunedin.

Ms Morrison's days have been spent maintaining the buildings, looking after the animals, helping with the intensive replanting programme, hosting the many visitors who come for picnics, walks, school camps and retreats, and always making time for a walk or a spin in a kayak.

It was her love of animals and the outdoors that drew her to the island, and an animal that hastened her departure.

About eight months ago she bought Cherokee, a pointer-Labrador cross pup.

Cherokee lived with her until Department of Conservation staff told her they had decided to make the island a dog-free zone because of concerns dogs would unsettle the little shags which nest there.

"The locals were furious and offered to start a petition allowing Cherokee to stay.

"I had to ask myself 'are you going to fight?', and in the end I decided it was time to go."

She is disappointed in Doc's stance.

"I've worked with them for years in a very friendly way and then you get all this officious stuff. It's really poor."

But Ms Morrison says she leaves with only positive memories of her "time in quarantine".

"I've been adjusting to it for months - I feel as though I have spent the whole summer mourning. But that's life. Change is essential."

Asked what she will do now, Ms Morrison says she is unsure.

"Ask me again on Monday. I'll have some ideas by then." 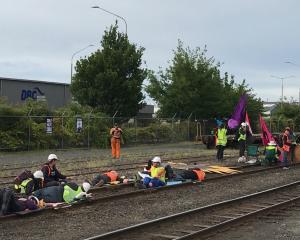 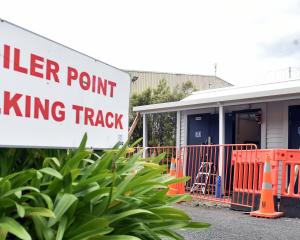