Board wants traction on lean-thinking idea 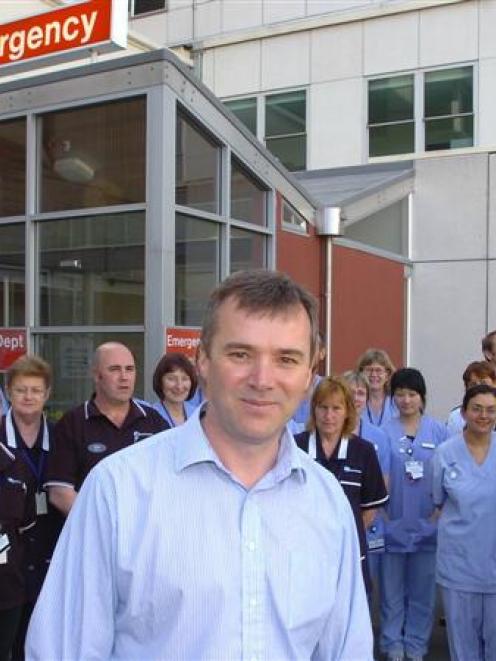 "Putting our Patients First" project leader Dr Tim Kerruish stands with emergency department staff outside Dunedin Hospital at the launch of the project in 2008. Photo by Peter McIntosh.
More detail about progress on the introduction of "lean thinking" at Dunedin Hospital was called for by two hospitals' advisory committee members this week.

Dr Malcolm Macpherson said he was concerned the Southern District Health Board was "borrowing the terminology" but doing the "same old stuff".

There was evidence showing that was happening in the United Kingdom with the National Health Service.

He said it was worrying to see a report in the Otago Daily Times this week about nurses and their concerns about the emergency department when the hospital should have been "well down the track" on ways to resolve some of the issues.

The article he referred to discussed concerns raised by nursing staff about the pressure the department was under and their ability to adequately care for high numbers of patients on beds in the corridor.

While some gains were made by the project, its clinical leader, Dr Tim Kerruish, warned in May last year that it might not get much further without a change in the hospital culture.

Dr Macpherson's comments followed those of Richard Thomson, who said all the international evidence showed quality initiatives had to be driven and supported from the top and he did not have enough information to evaluate what was happening.

He referred to a report which mentioned "lean activities to improve work flow" and said the project was on track, but he wanted a much clearer idea of what specifically was being done around that and whether there were measurable goals.

Later in the meeting, committee member Neville Cook asked whether waiting for Ministry of Health approval on some initiatives was slowing down progress.

Chief operating officer (Otago) Vivian Blake said the board was waiting to hear back from the ministry about a project which would map the journey of orthopaedic patients and try to identify where improvements could be made.

The outcome would be a reduction in the amount of waiting time a patient experienced, freeing resources for additional elective procedures and supporting the target of shorter stays in the emergency department.

If successful, the project would be introduced in other specialties within the hospital.

The project would involve almost every aspect of the hospital and would require some staff to be fully involved, so there would be some "back-filling" required.

The board had approached the ministry to fund that.

It had "passed first muster" and she was hopeful of hearing the outcome of its application soon.

If the board's funding request was unsuccessful, it would have to consider doing the lean-thinking studies "in house".

In response to the concerns raised by Messrs Thomson and Macpherson, Mrs Blake said she was happy to bring more information to the next meeting.

Computer simulation using gathered data is to be used soon to test a variety of ways of dealing with long stays in the emergency department, with the aim of showing which might be the most effective.

August figures presented by Mrs Blake showed that the number of patients turning up at the emergency department in August was 3334, nearly 50 more than for the corresponding time last year and about 250 more than planned for.

About 27% of those patients were admitted.