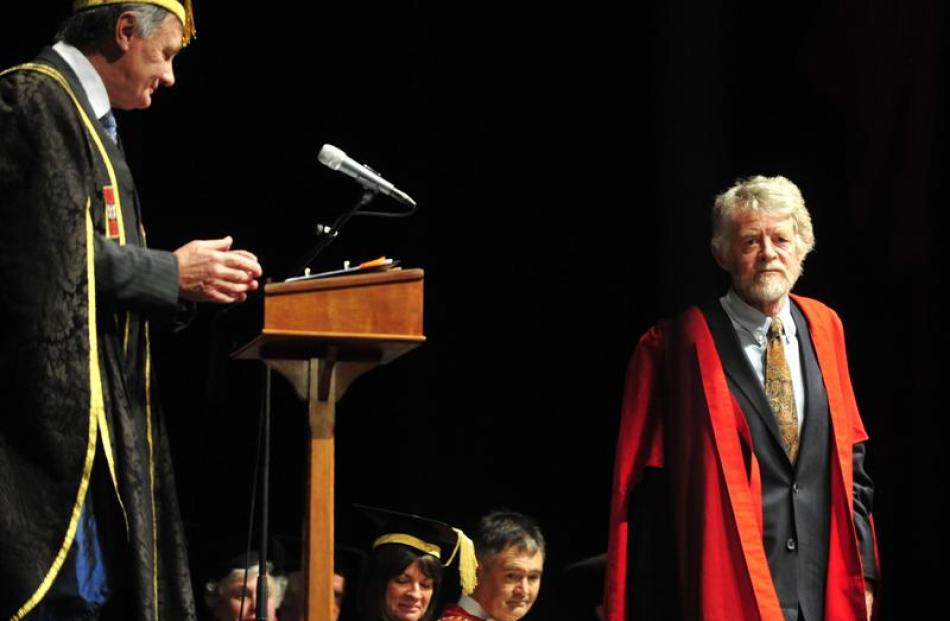 New Zealand increasingly appears to be a nation of "lapdogs rather than leaders" despite once having been seen as a social laboratory other nations admired, poet Brian Turner warns.

He was commenting in an address to about 350 graduates at a University of Otago graduation ceremony at the Regent Theatre, Dunedin, on Saturday.

Turner, who was awarded an honorary doctor of literature degree at the ceremony, said it was time for New Zealanders to decide "once and for all what is real and what is illusory, what is sustainable and what is not".

"That means working out how to manage the transition to a society based upon a different ethos, one that's more ethical and imaginative.

"We need to be smarter, more caring in every sense, abandon the lust for instant materialistic gratification, and ignore the freakery of those who would have us believe in the possibility of perpetual euphoria."

Decades ago, Aldo Leopold had implored people"to adopt a land ethic, to see all creatures and the very atmosphere we breathe, as a community to which we belonged" rather than mainly as "commodities to be used however we saw fit".

He reflected that in 1876 James Macandrew, the last Superintendent of Otago, had said in Parliament, "Central government would not throw away the Otago orange until it was sucked dry!"

Turner knew at times governments had "looked kindly on Otago" and "so they should, since we produce vast amounts of energy and can be seen as an intellectual powerhouse for the rest of the country".

"So I'm not advocating treason, quite the contrary, but I'm convinced that strengthening one's localities, one's regions, in the interests of our families and friends, and of the wider family of life on earth, is the best and most responsible thing we can do.

"Considerable resilience" was called for, everywhere, "if we are to make the transition to different ways of living and providing for ourselves".

Turner earlier paid tribute to his father and mother, Alf and Audrey, who were "unpretentious working class Dunedin people of great integrity" who had given his brothers, Glenn and Greg, and him "huge amounts of time and unstinting attention and love".

Turner, who is a former winner of the Commonwealth Poetry Prize (1979) and former Otago University Robert Burns Fellow (1984), recalled starting to try to write poems and prose as a teenager.

His father wondered if writing was "real work" and was making best use of his time.

"A valid question; but it's clear, now, that writing was a condition. I couldn't help it."