Bricklayer inspired to help save dolphins 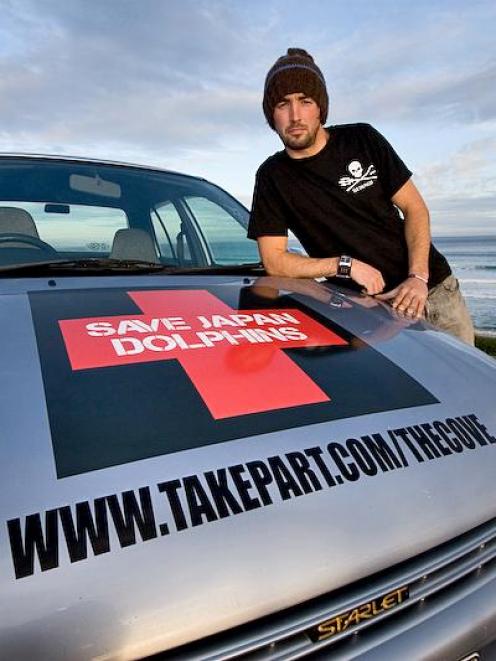 Dunedin man Tony Denley was so moved by seeing the documentary film 'The Cove' that he is pulling out all the stops to highlight the issue of dolphin deaths. Photo by Nic Reeves.
The shocking facts about dolphin slaughter in Japan, revealed in the award-winning documentary The Cove, have changed Tony Denley's life.

The Dunedin bricklayer, quiz master and keen surfer was stunned and deeply moved after seeing the movie in the recent International Film Festival. Described as a cross between a documentary and an adventure thriller, The Cove traces the efforts of dolphin activist Ric O'Barr, film-maker Louis Psihoyos and the Oceanic Preservation Society to expose the secret and fiercely guarded activities of the fishermen of Taiji in Japan.

Thousands of dolphins every year, migrating along the coast between October and March, are driven into a remote cove where a few females are taken for the global dolphin entertainment industry and the rest are slaughtered for their meat. An estimated 23,000 dolphins die each year at the cove and their mercury-tainted meat is sold cheaply or given away to unsuspecting Japanese people, Mr Denley said.

‘‘Seeing the film really affected me - I have never watched something before that made me feel I couldn't just carry on with my life,'' he said.

He is hoping to travel to Japan later this year to see the situation himself. And will head to Auckland in October for the launch of Earth Race, which is teaming up with the Sea Shepherd as it heads to Antarctica to disrupt the summer whaling season.

Mr Denley is also working towards gaining qualifications, including his master's ticket, in the hopes of eventually becoming a Sea Shepherd crew member.

‘‘It [The Cove] has changed everything for me,'' he said.

Closer to home, he is also planning to help raise awareness of the challenges facing our own Hector's Dolphins.

The Cove will return to Dunedin's Rialto cinema on national release next Thursday, August 27, and Mr Denley is pulling out all the stops to get local people to go along and see it. To that end, he has decorated his car with a large sticker proclaiming ‘Save Japan's Dolphins'' and will be on hand at this Saturday's Otago Farmers Market to promote the film.