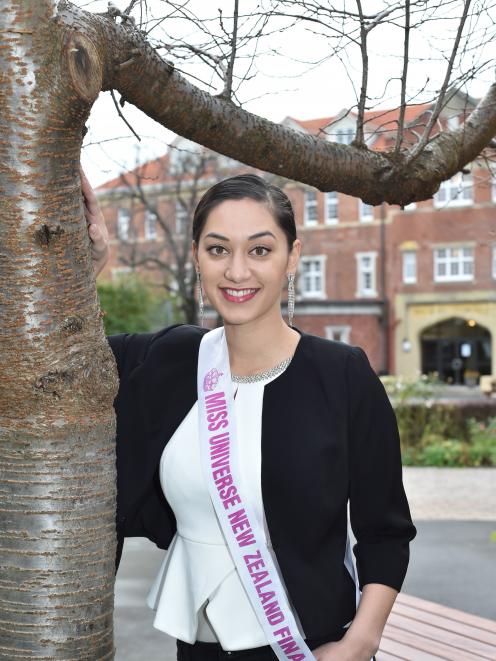 Miss Auva'a is now into her second year as senior tutor at Selwyn College, a role which has a strong emphasis on pastoral care.

''I'm really committed to my job here,'' she said yesterday.

She also works part-time as a Family Law reform researcher, loves singing jazz, writes Christian gospel music and was looking forward to releasing some of her music soon.

Like the other 19 Miss Universe New Zealand finalists, Miss Auva'a must meet a challenge they have all been set of running a venture or event to fundraise for Variety Kids. Her challenge was likely to involve a jazz voice musical event where people can make donations and listen to jazz.

She also hoped to work with some local schools and involve pupils in fundraising through mufti days, she said.

Although not a winner, she was placed in three of the five categories in the pageant and was one of only six chosen from the 120 finalists for a national cultural performance on television.

At the same time as she was becoming involved in beauty pageants, Miss Auva'a was studying at the University of Otago. She graduated with a double degree in law and music and, after completing her law professionals, was one of the first newly qualified lawyers admitted to the Bar during a formal ceremony earlier this year in the extensively earthquake-strengthened and refurbished courthouse.

With a full-time job and extensive musical interests, why did she choose to enter this year's pageant after a break of several years?

''I thought this would probably be a last opportunity for me,'' Miss Auva'a said.

At the age of 25, she thought she would be one of the oldest of this year's entrants. The upper age limit for entry was 27.

As a person of mixed blood and mixed cultures - her father is Samoan, her mother English - Miss Auva'a was conscious many young people in similar situations struggled to work out where they fitted in.

''I want to create a difference.''

She returned recently from a two-week retreat with the other 19 New Zealand finalists in Thailand. There they were being judged all the time by the select leadership team.

The New Zealand pageant final will be at Sky City on August 4.

Half of the vote will be from the select panel of judges, the other 50% from online voting by members of the public.