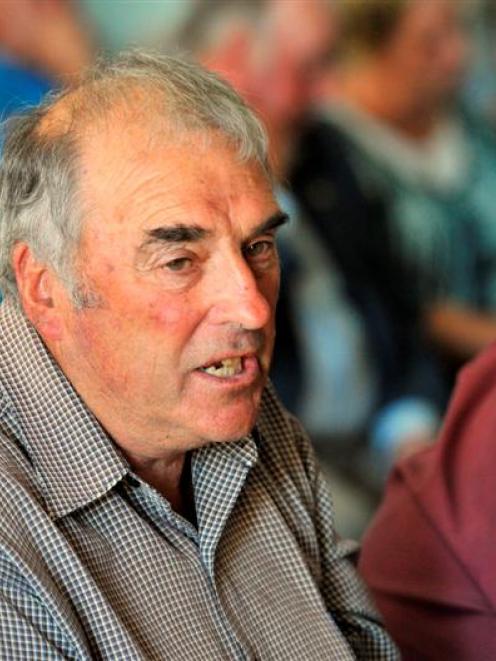 Peter Macdougall, pictured at the AgResearch meeting at the Croydon Hotel in Gore on Wednesday, believes sheep and deer farmers should band together and buy Invermay. Photo by Craig Baxter.
A suggestion that a company, involving various stakeholders, be formed to buy Invermay has been described as a ''nice idea in theory'' but one that would probably not work in practice.

After having attended a meeting in Gore on Wednesday to discuss AgResearch's restructuring plans, Mr Macdougall said he believed the decision to slash the number of scientists at Invermay had already been made.

He believed the ''best solution'' for Otago and Southland was for the proposed shift of staff to Lincoln to be put on hold and a company formed.

The new company could still apply to AgResearch for funding and it could do other research projects for the benefit of Otago-Southland, along with the likes of Alliance Group, Silver Fern Farms and AbacusBio, he said.

AgResearch would not do any research unless it got a commercial return - ''they are not into industry-good stuff'' - but a new company would be looking at science for the future.

Contracted work could be sourced from the likes of fertiliser companies and the meat and dairy industries.

Invermay had a ''world standing'' in research and science, while Lincoln was ''just a university'', he said.

Otago Regional Council chairman Stephen Woodhead said when contacted he did not think Mr Macdougall's suggestion was a practical option.

It was not local government's role to operate industry-good research, of the type of the ''AgResearchs of this world''. That was the role of crown research institutes.

From a local government perspective, it was more efficient for the regional council to contract specialist advice when it was needed.

Invermay should remain operating as an AgResearch campus for the benefit of the wider New Zealand agricultural industry, Mr Woodhead said.

He believed AgResearch's business case made it clear the model of four hubs, which all had links to universities, should be the perfect model.

Invermay had modern infrastructure, including the underutilised Christie Building, he said.

Environment Southland chairwoman Ali Timms said she thought it would be very difficult for a regional council to fund a facility such as Invermay long term, as both science needs and budgets changed over time.

Using Invermay as a contractor was probably ''a much better solution'', Ms Timms said.

''It could be a nice idea in theory. I don't think it would work in practice,'' she said. Much good information came from both AgResearch and others attending the meeting, along with good discussion, Ms Timms said.

She hoped Science and Innovation Minister Steven Joyce would act on a resolution approved at the Gore meeting asking him to hold an independent inquiry into AgResearch's plan.

She welcomed the ''free and frank'' discussion at the meeting but was sorry it had taken so long for AgResearch to ''front up'' to the sector.

Responding to Mr Macdougall's suggestion, another industry professional quipped that whoever could get agreement between all the suggested parties ''should get a knighthood''.

While it was a nice idea, he said it would take a ''pretty impressive effort'' to get all those disparate groups ''across the line and get it functioning in the way it needs to''.

Former Invermay director Jock Allison, who has been outspoken in his criticism of AgResearch's restructuring, said part of it would happen, if sheep and deer research was shifted to Lincoln. He had much sympathy for Mr Macdougall's view, Dr Allison said.