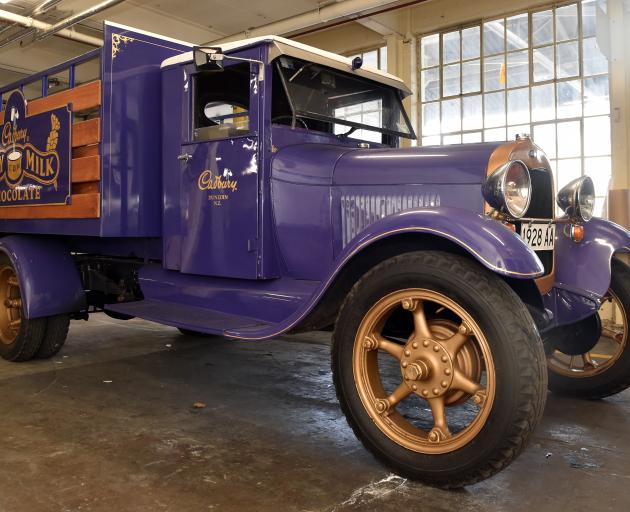 A vintage 1928 Ford Model A truck which has been given by Cadbury to the Bill Richardson Transport World museum in Invercargill. Photo: Peter McIntosh
Three vintage vehicles, a 500kg Easter bunny mould and other memorabilia from the Dunedin Cadbury chocolate factory have new homes.

Since the factory was closed earlier this year, with the loss of more than 350 jobs, company owner Mondelez Australia Pty Ltd, has been working to give the Cadbury heritage collection of vehicles and other items to Dunedin institutions.

But until yesterday, it seemed nobody wanted three old purple Ford vehicles - a delivery van of uncertain age but probably 1920s, a 1919 TT milk tanker and a 1928 Model A truck - and the giant rabbit.

A lack of space for the items appeared to be the main problem for various local institutions.

Then an email from Jake Hatton, the company's external affairs manager in Melbourne, arrived with the news that ''a fantastic home'' had been found for two of the Cadbury vehicles - the truck and milk tanker - and the giant bunny chocolate mould.

Those items are going to the Bill Richardson Transport World museum in Invercargill, where they will be on display surrounded by other Cadbury memorabilia.

Mr Hatton said the company's ''strong preference'' had been to retain heritage material in Dunedin and local homes had been found for much of it.

''While we did receive a number of contacts from individuals keen to purchase the vehicles, we committed to donating them to an organisation that has a great facility and the ability to make the vehicles accessible to the public,'' Mr Hatton said.

He also said the company was ''in the final stages'' of negotiating with a Dunedin organisation which planned to launch its own public historical display in the next couple of years.

The delivery van would remain in Dunedin with the Dunedin Fire Brigade Restoration Society.

The society was developing a museum ''in a central location'' and the van would be displayed there.