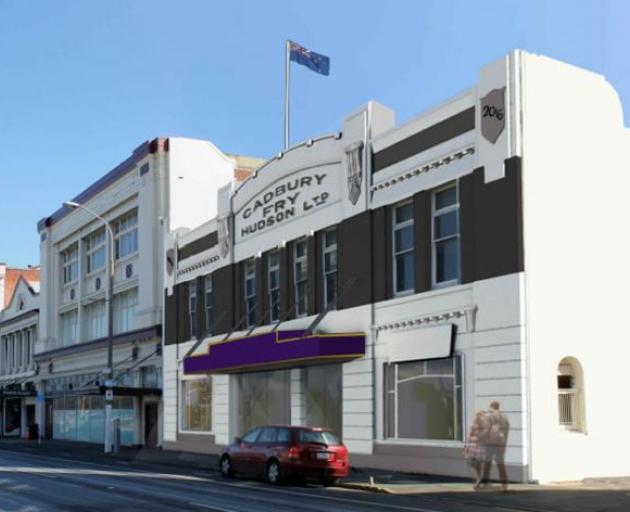 A photomontage of the planned restoration of the Cadbury dairy building in Castle St. Image: Origin Consultants
Mondelez International has announced it will be closing Cadbury World, with the loss of 39 jobs, following today's Dunedin Hospital announcement.

This comes after Health Minister Dr David Clark today confirmed the new Dunedin Hospital will be built on multiple blocks in central Dunedin, including all of the former Cadbury factory site.

Mondelez International area vice president Amanda Banfield said it was in the final stages of negotiations for the Ministry of Health to acquire the Cadbury Dunedin factory site for the development of Dunedin’s new hospital.

The sale of the full site meant "unfortunately" the $7 milliont redevelopment of Cadbury World was unable to progress as intended, impacting
Cadbury World team members.

"It is disappointing that we are not able to progress with our Cadbury World plans.

"When we started this process and developed plans for the new Cadbury World experience, the possibility of using the site for a new Dunedin Hospital was not in the frame.

“We’ve been working hard to restore the historic Old Dairy Building as the new home for Cadbury World and have already invested a significant amount of time, energy and resources into the project.

“We would like to sincerely thank our outstanding Cadbury World team who have made such a success of the operation, especially over the last 12 months," she said.

The company understood there would be "mixed emotions" about the announcement.

"On one hand, we’re disappointed the redevelopment of Cadbury World won’t be going ahead.

"On the other hand, people will be delighted about the new healthcare facility and the thousands of jobs created in central Dunedin."

The company was determined to find a future use for the site that benefited Dunedin and the region – and the new hospital "unequivocally meets this aim", she said.

“The new hospital is a transformational project for the city.

"The construction of a modern hospital that will deliver world-class health services to people from across the South Island for decades to come is a fantastic legacy for this landmark site and we’re delighted it will have such a positive, long-lasting impact for the community."

Mondelez had entered consultation with the 21 full-time and 18 part-time Cadbury World team members.

Mrs Banfield said the focus was now on supporting the Cadbury World team.

"I wouldn't be surprised if they were to say that the difficulty of running a tourism operation against a construction site were one of the things they had in mind when they made that decision as to the future of that site," he said.

The Otago Daily Times understands  Cadbury World and Cadbury Cafe staff were told of the news this morning.

A sign was also up on the Cadbury Cafe this morning saying it would be closed until 11am - the time of the hospital announcement.

At 12.30pm a small group of people waiting for a tour were ushered in to the Cadbury World building by a man in a high-viz vest and the door shut behind them.

Two minutes later they came back out with a refund and a basket of chocolates. They were not given any indication whether their tour could be taken up at a later date.

Good riddance, and don't come back.

Really disappointing that more people lose their jobs, but it is Mondelez's fault in the first place that hundreds of people have already lost their job.

Did ANYONE actually believe that Mondelez was going to spend money on a new Cadbury world? LOL. Now they're pretending the hospital development is to blame when in fact they were in negotiations with the MOH when they announced the planned spend on Cadbury world. At last the charade of Mondelez caring about Dunedin can end.