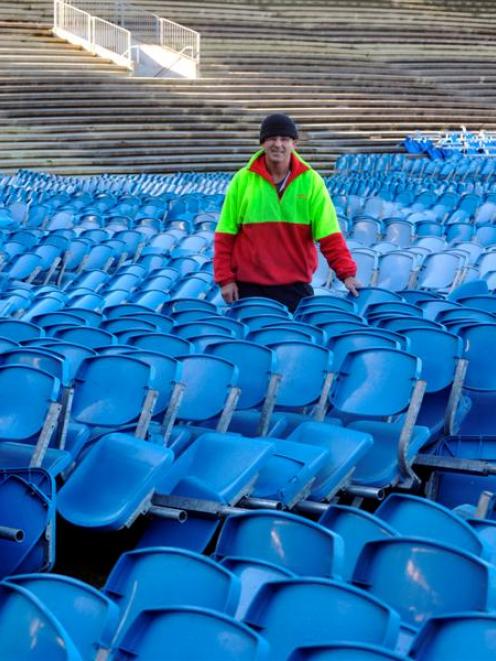 Carisbrook Rotary Project chairman Brendon Bearman stands among a stack of Carisbrook seats for sale. Photo by Gregor Richardson.
About $200,000 of Carisbrook memorabilia has been sold so far as sports fans across the country claim their piece of Otago sports history.

Carisbrook Rotary Project committee member Lindsay Thorburn said the goalposts sold for about $5000 to a buyer in Ashburton and seats have been selling quickly.

''Seating is constantly going out the door. We have had organisations from all over New Zealand contacting us about them.''

About 5000 seats have been sold out of 13,000 and Mr Thorburn did not think it would take long for the rest to sell. They can be bought individually or in groups.

The auction was a combined fundraising project by the nine Rotary clubs in Dunedin, Mosgiel and Milton and has the goal of making between $250,000 and $1 million.

''As people hear about it more and more. We are getting a lot of inquiries about the signage as well. That seems to be a real hard number. We have 30 lots of signs and are going to put them up ... for about $100 each,'' Mr Thorburn said.

About 200 boxes of Carisbrook's turf have been sold so far and one of 12 turnstiles also.

''It's going really well. Every time I go on the internet, another 20-30 people have bought something. It's been a massive exercise. It's a boom for us.''

Carisbrook Rotary Project chairman Brendon Bearman did not yet know what would be done with the money raised from the sale, but it was planned to leave something in the community as a legacy to Carisbrook.

''We don't want to make a knee-jerk reaction with the money just because it's there. We want to do it right.''

The Carisbrook Rotary Project had until July 28 to remove everything it wanted out of the stadium before demolition work began at the site.

The items are being sold on Trade Me.