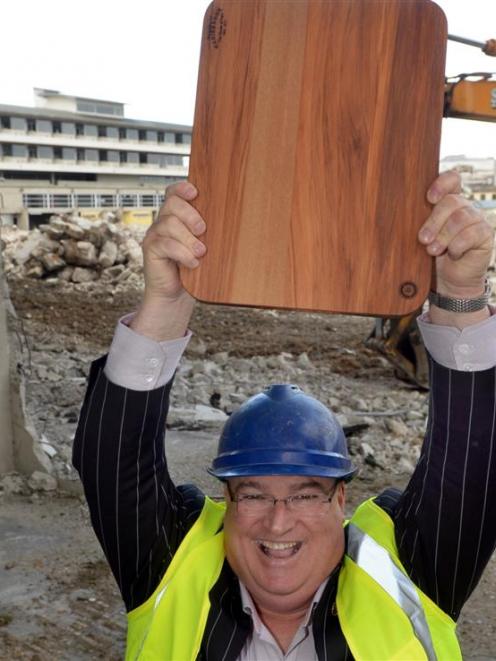 Carisbrook Rotary Project committee member Lindsay Thorburn said the remaining rimu bench seats salvaged from the Rose Stand would be made into cheese boards and platters.

The wood creations would be in Otago longer than the Ranfurly Shield, he said.

About 500 chopping boards would be made and 400 boards had been pre-sold.

The demand for the boards had revealed it was more profitable to build $90 boards from a seat than sell a whole seat for $500.

The Otago Rugby Football Union had given Rotary the authority to have the words ''Carisbrook'' and ''house of pain'' laser-engraved on the woodwork.

The fundraising project by the nine Rotary clubs in Dunedin, Mosgiel and Milton would reach its goal of $200,000.

The funds would be used for an undecided project in Otago, he said.

Southern Demolition and Salvage digger operator Chris Wilson said about 3500 tonnes of concrete had been ''pulverised'' at Carisbrook.

The concrete was ''munched'' so the cable steel reinforcement could be removed.

When the labourers, who were working for the company in Christchurch, were available, they would start ''stripping out'' the corporate boxes, Mr Wilson said.