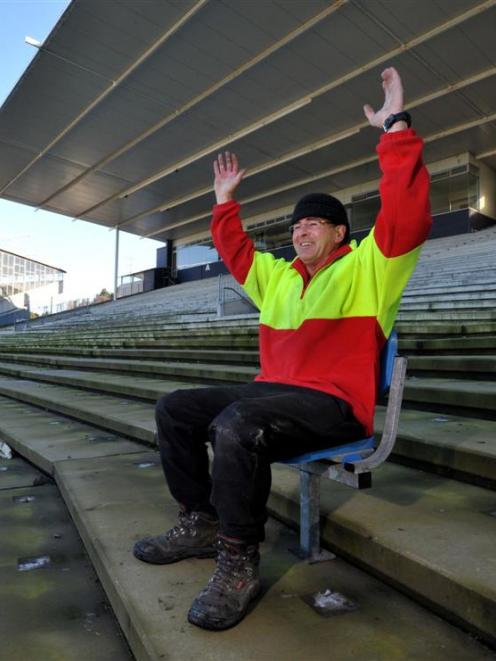 Rotarian Brendan Bearman tries out one of the last seats left in the Railway Stand at Carisbrook on Monday morning. Photo by Gregor Richardson.
People wanting a slice of Carisbrook history will have their last chance in Dunedin today. A three-week fundraising sale of stadium fittings ends with a garage sale at Carisbrook today.

''This is the final push to get rid of everything. We have to be cleared out by Sunday,'' Carisbrook Rotary Project committee member Lindsay Thorburn said yesterday. The garage sale, from 10am to 3pm, will include the remaining signage, turnstiles, turf and seating.

Memorabilia from the 130-year-old stadium had been snapped up by sports fans throughout New Zealand, Mr Thorburn said.

The goalposts sold for $5000 to an Ashburton buyer and blocks of 700 seats from the Railway Stand were sold to buyers in Invercargill and Oamaru.

One of the most popular items had been 400mm by 400mm wooden boxes of Carisbrook turf, which include a certificate of authenticity.

''We sent the first 50 boxes of turf off the other day. We'll also be doing larger lots of turf that we can cut into a lawn for people,'' Mr Thorburn said.

''The project has been going really well. We've sold a lot of stuff and it has gone with military precision. We've had hundreds of volunteers helping out down here at times. This project just wouldn't have been possible without all the volunteers.''

The former sports ground was sold by the Dunedin City Council to construction company Calder Stewart for $3.3 million last month.

The auction of fittings has been a combined fundraising project co-ordinated by the nine Rotary clubs in Dunedin, Mosgiel and Milton.

The sale had so far raised more than $200,000, but it would be three months before a final tally was known, Mr Thorburn said.