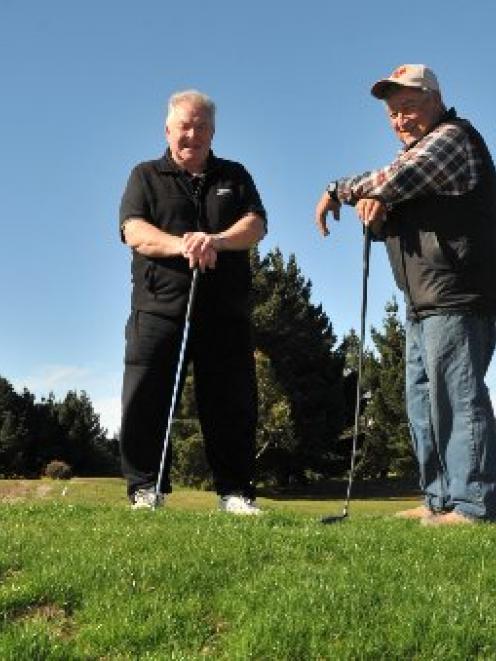 Otakou Golf Course president Alex MacGillivray and club member Kevin Charles stand on a swale of Carisbrook turf built at the back of the new fifth hole green. Photo by Linda Robertson.
Carisbrook's demise was the end of an era for Otago. Shawn McAvinue tracks down those lucky enough to secure a memento of the stadium before it was demolished.

The Carisbrook pain continues as rescued turf is used to undulate and lengthen the newly remodelled fifth hole at Otakou Golf Course.

Club president Alex MacGillivray said the par-five hole on the nine-hole course on Otago Peninsula used to be 487m long with a flat green.

But after a recent remodel, the hole was now a ''fairly narrow and undulating'' 500m, with a new green that sloped away.

The hole was remodelled because the old green flooded during winter and was often unusable.

The sale of Carisbrook turf spurred the club to start the hole remodelling project.

''We've been threatening to do it for three years. This year we got stuck in and got it done.''

A swale is a wide, shallow and mowable valley to create character in the golfing landscape, which diverts and controls the flow of surface water.

The asking price for the Carisbrook turf was $3 a square metre and the club negotiated with the Carisbrook Rotary Project member to bring the price down to $2 a sq m.

The turf that remained after the swale was built was used around the edging of the sixth-hole tee.

Project manager and club member Kevin Charles said the swale took a 16-man team of volunteers about 75 hours, over two weekends, to lay. Some vegetation had to be moved for the remodelling, he said.

''I got a bucket-load of balls out of one of the flaxes I shifted.''

The sandy Carisbrook turf was growing fast and was ideal for the ''natural links''course.

A links course is typically characterised by dunes, an undulating surface, and a sandy soil which readily supports various grasses.

The hole remodelling would hopefully entice people to the club, which was struggling with about 70 members.

The area between the back of the fifth hole green and the sixth hole tee was called The Brook, Mr Charles said.