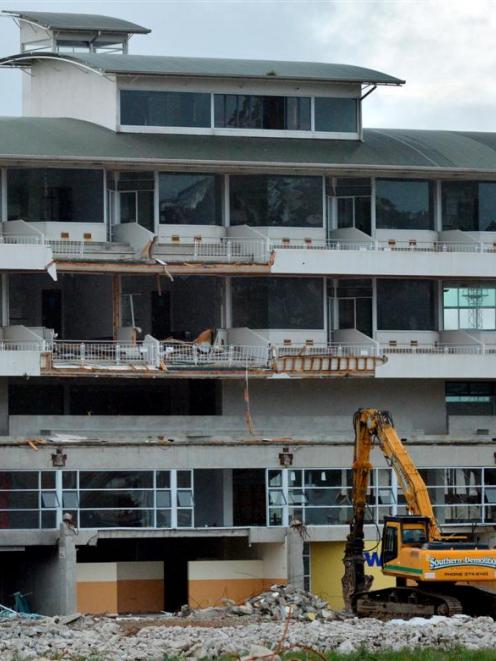 However, the site's new owner, Calder Stewart, has already secured the return of the $200,000 bond it paid to the Dunedin City Council as part of its purchase agreement.

That followed the results of an independent report, which last month concluded the company had complied with a requirement to have the old venue's grandstands - except the four-storey hospitality complex - demolished by Christmas, she said.

''As per the clause, $200,000 of the sale price has been refunded to Calder Stewart as a paper transaction,'' she said.

Work to remove it began in earnest yesterday and was expected to take two months, and would be a ''reasonably difficult'' job, he said.

''It's a reasonably difficult building because you've got a power station beside it ... We don't want to shut down South Dunedin.

''There's a degree of difficulty in it, being high and being concrete.''

Piles of rubble remaining on site would also be crushed into aggregate over the next two months and recycled using specialist machinery to be brought to the site, Mr Edge said.

The aggregate would then be used in future development on site, possibly for roads or foundations, he said.

''There's quite a bit of recycling that's going to happen in the next two months.''

All work was expected to be completed in two months, leaving behind a cleared, fenced, vacant site.

The only clue to the old ground's former existence would be the historic brick Neville St turnstile building, which would form part of a pocket park in the area.

The company agreed to pay $3.5 million, including a $200,000 bond, which was to be returned if the stadium's grandstands - but not the terrace hospitality complex - were demolished within six months.

The deal left the council with a $3.418 million loss after buying Carisbrook from the Otago Rugby Football Union for $7 million in 2009.

The loss comprised a $2.256 million cash loss on the sale to Calder Stewart, and additional holding costs totalling $1.162 million.

The repayment of the $200,000 bond was included in the calculations, meaning the council's total loss would not rise.