An all-terrain-style vehicle, with a roll cage, was damaged after a crash and a short police pursuit in Dunedin yesterday morning.

There was no confirmation from the police that an unlawfully taken vehicle had been recovered after the crash at Caversham.

Mountain Biking Otago president Kristy Booth later said images of the crashed vehicle, which had been widely shared online, indicated to her that the machine was highly likely to be the club's new All-Terrain Vehicle, valued at $23,000, which had been taken from the city mid last week.

Police had not yet contacted her about the situation, but she felt relieved that the vehicle, a Honda Side by Side ATV, which had been bought in February after fundraising and sponsorship, was very likely to have been recovered.

The man, who asked not to be identified, said a police car was travelling in the opposite direction, near Carisbrook School, and it turned to follow the 4X4 vehicle. 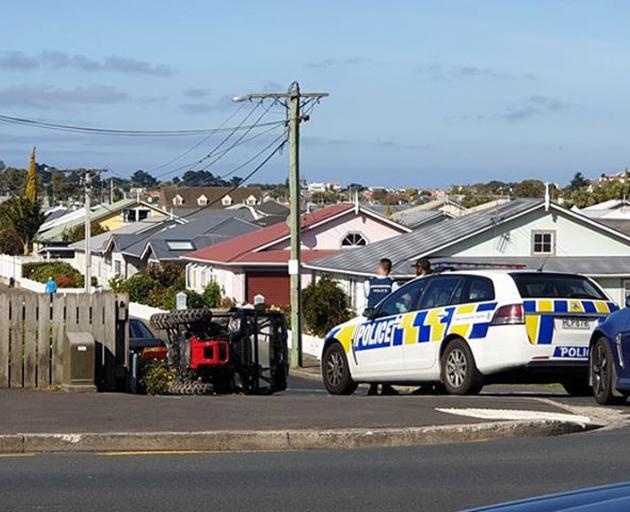 The ATV on its side. Photo: Supplied
The 4x4 vehicle sped up and attempted to enter nearby Eastbourne St at speed but "flipped" with a loud bang, the witness said.

The driver was later speaking to police from the vehicle, and did not appear to be badly injured, the pedestrian said.

Asked what had happened, a police spokesman said police had been advised of a crash at the intersection of Eastbourne St and South Rd, Caversham about 11.20am.

The single-vehicle crash reportedly involved a ATV bike, and it appeared there were no serious injuries.

Police were speaking with the rider, the police spokesman said.