Curly questions for health board candidates 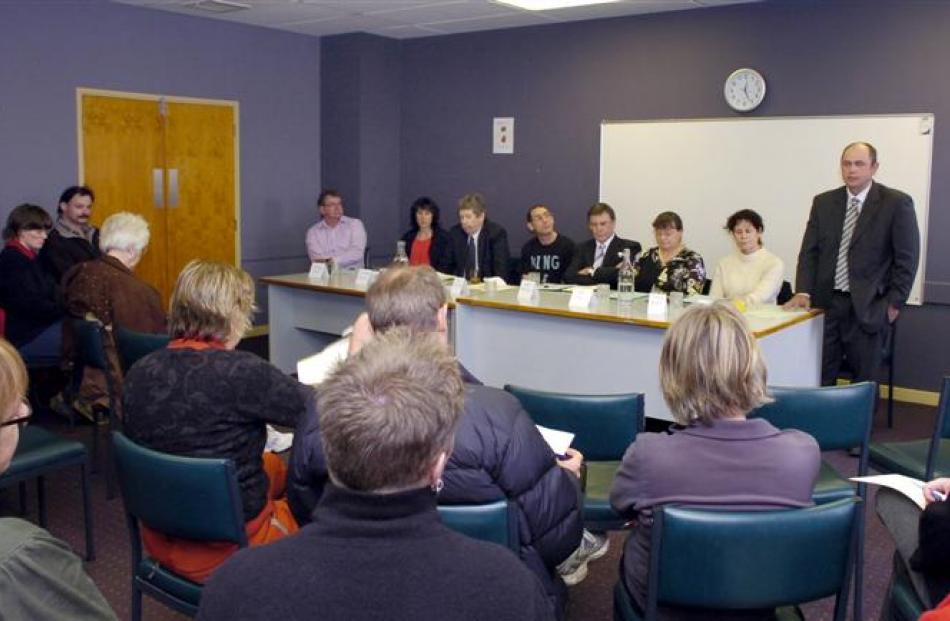 Prospective Southern District Health Board candidates were thrown a few curly questions yesterday by the audience at the only public meeting for Otago hopefuls.

Candidates' views were sought on alternative health, euthanasia, organ donations and the board's relationship with community providers, or the NGO sector.

The meeting, jointly hosted by the Public Health Association and the Dunedin Council of Social Services, attracted about 30 people.

Appearing at the meeting at Dunedin Community House were Sophia Byles, Paul Douglas, Pat Fox, Chris Fraser, Marianne Hannagan, Chris Marlow, Graham Roper and Richard Thomson, who are vying for four seats on the Otago constituency of the district health board.

In response to the euthanasia question, only Mr Marlow was totally opposed, for religious reasons; other candidates either supported it or said they would support it if it were legalised and if the public wanted it.

Dr Arthur Chesterfield-Evans asked candidates for their views on organ donations from the dead.

Mr Thomson suggested a law change was required to end the right of families to override a person's stated wishes once they had died.

Other candidates suggested the DHB could take a leadership and education role on the issue.

The most intense part of the meeting occurred when a woman in the audience asked if the new board would continue "feeding pharmaceuticals" to people instead of promoting alternative medicine.

The woman interrupted board members who were trying to answer the question, and stormed out a few minutes later when Mr Marlow declared himself opposed to euthanasia.

Members addressed the question by saying alternative therapies needed to be certified and proved before being offered in the mainstream health sector, with Mr Thomson pointing out the board did not make clinical decisions.

Plunket Otago and Southland area manager Barb Long asked candidates how they planned to improve communication with the community or NGO sector, which is contracted to provide services.

She asked how the board could increase openness in the way contracts were awarded and prevent the board's own service provider arm being favoured for work.

Mr Fraser, a former planning and funding general manager for the DHB, said because of the way DHBs were set up, they were biased in terms of favouring their own service providers, a tension which could be managed.

Mr Thomson, a former chairman of the old Otago board and a current DHB member, admitted the DHB sometimes got it wrong when dealing with other organisations.

"We regularly do things badly", and that was noticed, rather than the things done well, he said.

Mr Roper said too many issues were dealt with by the board in secret rather than in open meetings - more openness would improve matters.

Candidates opened the meeting with a seven-minute personal statement each.

They spoke of their political affiliations - or lack of affiliation - values and beliefs, childhood experiences, role models and special areas of interest.