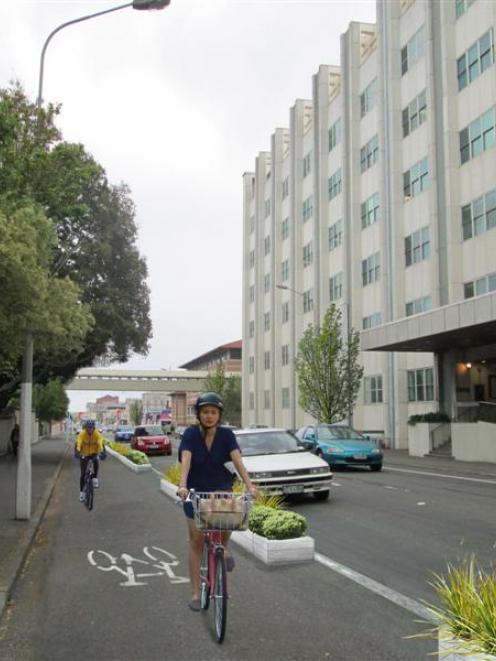 His comments come as other business owners, worried about the loss of up to 391 car parks, rally against the proposal.

Otago Chamber of Commerce chief executive John Christie told the Otago Daily Times he had been contacted by ''dozens'' of business and building owners who were ''overwhelmingly'' opposed to the plan.

They worried the loss of car parks would impede shoppers' access to their businesses, resulting in a drop in turnover that would cost them money, he said.

''It is certainly an issue in the CBD, no question about that.

''Whilst I know there will be a lot of people that are very favourable towards these changes, overwhelmingly the business community seems to be bearing the brunt of the impact,'' Mr Christie said.

Council transportation planning manager Sarah Connolly yesterday stressed the council was investigating ways of compensating for the loss of parking on the one-way streets in other parts of the city.

That included moving parking meters from the one-ways to other areas, consideration of a new car parking building, more angle-parking and other changes, she said.

Together, the changes could eventually result in more parking in the city, not less, she said.

The comments follow more than 1000 public submissions flooding in within days of the start of the month-long consultation period.

The proposal - developed by the New Zealand Transport Agency, Dunedin City Council, cycling advocates and a consultant - offered two options to improve the safety of cyclists along the city's one-way streets.

NZTA project team leader Simon Underwood earlier this week described the feedback as ''incredible'', but his description of some opponents as ''almost a bit nimby'' prompted a blast from Mr Eddy yesterday.

Mr Eddy said he had spoken to 20 business and building owners who were ''up in arms'' over the proposals and planning to fight the changes.

He was concerned inner-city parks were already in demand, and businesses like his - away from the proposed cycleway routes - had not been contacted in advance to help shape the proposal, which now seemed ''predetermined''.

Mr Eddy said he - like other business owners - was ''not anti-cyclist'', as he regularly cycled himself, but ''the consultation process is not operating in an open and transparent manner''.

''The whole proposal just seems like utter lunacy and incredibly ill-thought through,'' he said.

''It feels very much like there's an agenda of predetermination.''

Ms Connolly said the month-long submissions window - which would close on December 6 - was part of the initial consultation phase, ''and this is the time for those businesses that are concerned to put their views across''.

The consultation period would include three drop-in sessions, online submissions and surveys, but no public hearing, she said.

Instead, the project team would review the submissions before making a final recommendation to the council by March next year, she said.

Mr Christie said the chamber was yet to confirm its position, but it was important to ensure cyclists were safe while mitigating the consequences of change for businesses.

''I don't think any business person would decry the need for safety . . . it's just doing it in a way that minimises the impact on their businesses.''

The chamber would urge the council to replace lost car parks elsewhere, possibly by investing in a new car parking building, he said.