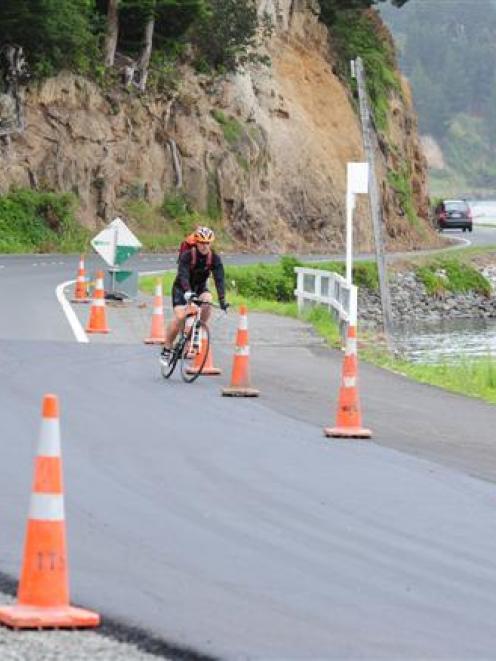 NZTA staff yesterday announced the agency's full subsidy would be paid towards the $1 million cost of the latest stretch of the project, from Vauxhall to Doon St, on Portobello Rd.

The move followed an initial decision last week to withdraw half the subsidy, leaving the council with a $278,000 shortfall and raising doubts about the 11 stages of the project yet to be completed.

However, uncertainty over funding remained for the 11 sections of the peninsula cycleway to follow, he warned.

Councillors would debate the project at next week's infrastructure services committee, but it was likely no further work on the project would be undertaken during the 2011-12 financial year.

The pause would be needed to consider the implications of the NZTA funding problems, as well as ways the order of the project could be reconfigured to optimise its progress, he said.

"I would expect there will be a change in timeframe and the order in which things are done," he said.

His comments come after council staff were told last week the NZTA subsidy for the cycleway component of the work would be removed, leaving only the subsidy for seawall repair work in the same area.

The change would have reduced the overall NZTA subsidy by half, from 62% to 31%, creating the shortfall for the Vauxhall stage.

It also raised questions about a possible $9 million shortfall in NZTA funding for the remaining stages, together worth $27 million, due to be completed by 2023, Mr Harrison told the Otago Daily Times earlier this week.

NZTA Otago-Southland regional director Bruce Richards yesterday confirmed the "good news" that the decision to partially withdraw the subsidy had been reversed, with the Vauxhall section judged on the merits of the entire cycleway project.

The decision boded well for future components of the cycleway, which would also be assessed in the samemanner, Mr Richards said.

"We are doing our best for the region."

Mr Harrison said one option likely to be considered was to revert to building the remainder of the cycleway working outwards in one direction, from the city out to Taiaroa Head.

The community board had previously asked for the network to be built in sections, around population centres generating the most demand on the peninsula, to be linked together towards the end of construction.