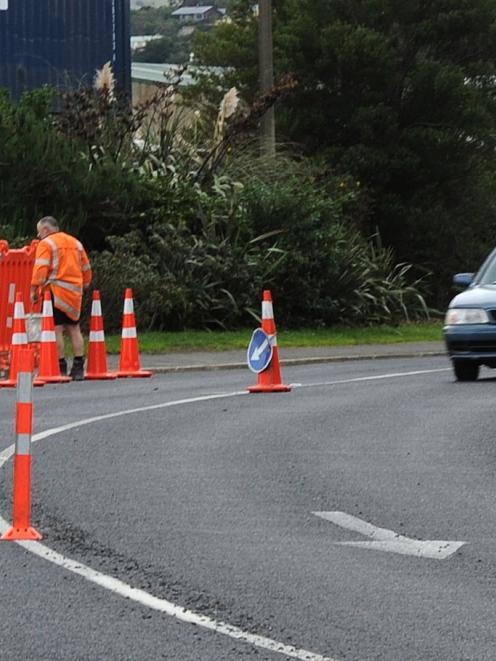 Works on Portobello Rd this week. Photo by Craig Baxter.
The Dunedin City Council says it is taking stock of the South Dunedin cycle network and reviewing the way forward as project costs and complications start to mount.

The review may result in changes and/or delays to what has already been described as an ambitious plan.

The council wants to build the network of cycleways criss-crossing South Dunedin over 18 months, for $4.5 million.

But after completing one stage of the four-stage project, a third ($1.6 million) of the budget has already been spent, even with one of the routes bumped to a later stage, and with the most complicated stages still to come.

Transportation group manager Gene Ollerenshaw said staff, who had not done such a project before, had to estimate costs.

But after the first stage of the project was completed and tenders received for the second, it had become clear the $4.5 million budget for the overall project might not be sufficient to complete all the remaining routes, as per the high-level network plan adopted by the council.

Staff were now ''re-forecasting'' the project budget to find out what it would actually cost.

As the council got into the detail of building the cycleways, it was finding things were ''a bit more difficult'' than the original lines on the cycle network map suggested, Mr Ollerenshaw said.

''For example, [putting a cycleway in] Macandrew Rd is much more complex and challenging than what we understood when it was first drawn as a line on the map. You go back to the strategic cycle network [previous name] and they were pretty big fat lines on a high-level, low-detail map.''

Some things had sounded simple, for example quiet streets, but staff were finding they required many build-outs and it was ''quite complicated'' to keep them safe.

It was prudent, rather than imperative, to do a review at this stage, he said.

''We haven't got a cost blowout or anything like that. We just don't want to get ourselves into that position.''

The situation was not unexpected; it had just evolved, as it tended to with such big, complicated projects, he said.

''As contract prices come in, you have to take stock of where you are. So, now we are looking forward, to see whether we still can do all the things we set out to do two years ago.''

Although tenders were in for the project's second stage, the contract would not be awarded until the review was complete.

The review would look at options for the remaining stages of the project, which at present included cycleways on some of South Dunedin's busiest streets, including Victoria Rd where residents recently got upset about a cycleway proposed for their street.

Asked if those stages could be delayed or changed, Mr Ollerenshaw said ''potentially''.

''We're just working through those at the moment. We haven't got any more details yet.''

Staff would complete the review over the next few weeks and present the options to councillors next month.

If substantially more money was needed to complete the project, the council would have to make a new application to the next national land transport programme round.

If it was a minor amount, it might be found within existing budgets.

A staff member working on the project last month called it ambitious for the time and budget given it.

Infrastructure committee chairwoman Cr Kate Wilson said Dunedin was one of the first cities to build such a network and there was no textbook on how to do it.

Estimating costs was always fraught, and it had been flagged to councillors there might be a problem with the budget once the tenders came in.

The council now had to think more strategically about how it finished the project. It may not be able to deliver ''absolutely everything'' in the time frame, but it had to be usable and up to standard.

''The worst thing would be having something that no-one wants to use.''

She did not think there was much will at the council to spend any more money on the project, so it was likely compromises would have to be made to see it achieved.

''We'll have to make savings elsewhere, or do it in a cleverer way.''

She said it was something the council wanted to finish.

''There will always be people not wanting to see change, but I think it's time this city realises that if it wants to grow, there has to be some change to attract people looking for a certain lifestyle.''

Timeframe: All cycleways to be built by July 2015.