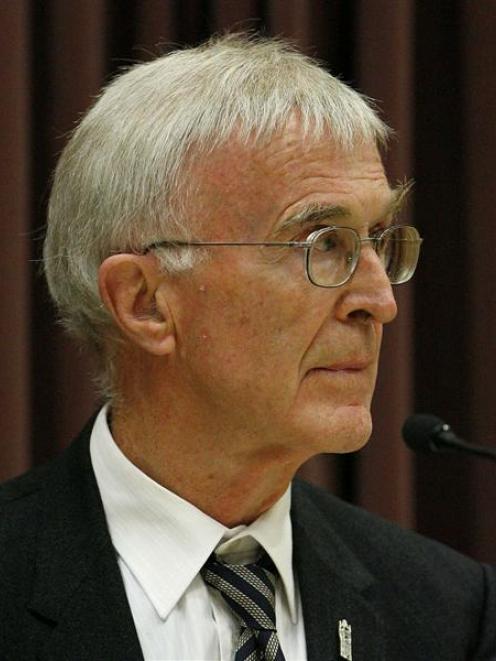 John Barsby
Friends of murder accused David Bain have described him as a singer with "an amazing voice", someone who could have had an international career in opera - a potential Jonathan Lemalu.

And the witnesses who knew Bain as a university student and in theatre and operatic productions in Dunedin in the 1990s, recalled him as a very nice person, quiet and friendly, passionate about his singing, outgoing and very motivated, a helpful leader with a sense of humour who got on well with everyone.

During his brief contact with Bain at rehearsals for Sophocles' Oedipus, university Classics Prof John Barsby found him to be a very pleasant, mature, sensible, level-headed person, the High Court at Christchurch was told yesterday.

"It was very hard to believe he'd gone home and murdered his family," Prof Barsby said before being stopped by Justice Graham Panckhurst.

He was not teaching Bain, who was doing a paper in classical studies in 1994, but had spoken to him in his role of elected class representative in April that year, Prof Barsby said.

He found him "quite impressive" and what he had to say "sensible and constructive".

Catherine Spencer, of Dunedin, a resource consultant for the University of Otago's German Department, met Bain about the end of 1993 when his singing teacher thought he should learn some languages because he was interested in an international singing career.

Ms Spencer remembered Bain because he was friendly, outgoing, and very motivated. They would often have discussions because of their common interest in the theatre and opera and Bain would show her the songs he was learning with the translations.

The last time she saw him before the events of June 20 was at lunchtime on Wednesday, June 15, when she was helping him with some pronunciation. They had a lengthy discussion about whether he should enroll in a theatre studies course.

Ms Spencer said she had visited Bain regularly in prison.

Pharmacist Pattie Napier recalled meeting Bain through her involvement in the Dunedin Opera wardrobe department about the end of 1992.

She got to know him well and found him "incredibly patient" with all the costume and make-up requirements.

He had a good sense of humour, was always involved in the practical joking that went on backstage but was very helpful to everyone.

She described Bain's voice as "amazing", ranging over three octaves.

After his arrest, she had written to him in prison and continued to visit him.

While describing himself as a "wannabe" singer, Mr Robertson said Bain had "a fantastic voice" and it would not have surprised him if Bain had gone on to an international singing career.

He could have been a Jonathan Lemalu, Mr Robertson told the court. But Bain was definitely not a prima donna. He would help anyone, was not "a nerd", but was "friendly and vivacious".

To Crown counsel Cameron Mander, Mr Robertson agreed he had been a long-time supporter of Bain and had been interviewed as part of a group on television.

But he would be very angry if there was any suggestion he would go in the witness box and lie for Bain.

Also involved with Bain through the opera was Geoffrey Swift, who worked backstage and also videoed some of the productions. He recalled Bain as "a cheeky hard case", who got on well with everybody. And he remembered going to the Bain house on Friday, June 17, with a video of Godspell, a production in which Bain had a role.

Bain asked his mother, Margaret, for $10 to pay for the video before gathering up his university books and papers, kissing Margaret on the cheek and heading off to university.

Two women in the chorus of Oedipus told the court Bain had not been wearing his glasses when he came to rehearsal on Sunday, June 19. He said he had recently broken his glasses, while leaving his music teacher's house.

Sarah Gallagher said although the police contacted her with some questions about two years ago, she had not heard from them again, so contacted Bain supporter Joe Karam. She was sure Bain was not wearing his glasses.

Sarah Cummins said she "distinctly" remembered Bain was not wearing his glasses on the Sunday. The reason she remembered was that she had tried to think if there was anything different about him on that day and it was the glasses. It was a very clear recollection as he had worn them previously.

That was what she told the police, she said in answer to Crown counsel Robin Bates.