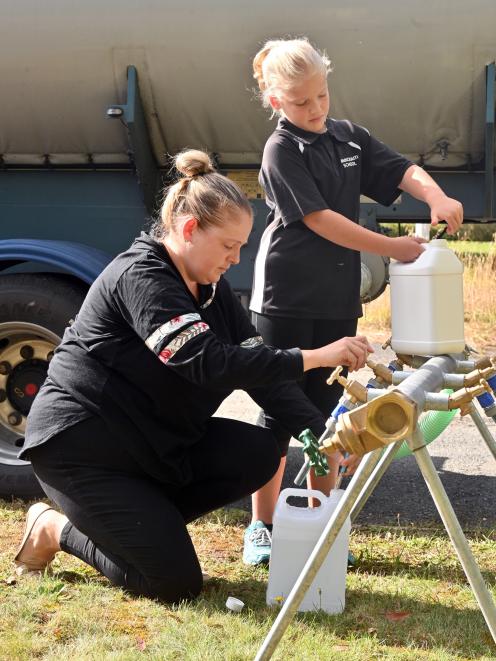 Hawksbury Village Management Ltd managing director Kylie Scott, with daughter Emily, says the 120 residents in the area feel forgotten, despite also having no drinking water. PHOTO: LINDA ROBERTSON
The Dunedin City Council will not start to review its own processes in relation to the lead contamination of drinking water at three East Otago towns until after the Ministry of Health’s review is done next month.

On Tuesday, the ministry announced it would undertake a rapid review of the public health response to the water supply issue, which came to light last week.

Dunedin Mayor Aaron Hawkins said in an email statement last night the council’s review of processes at its end would be informed by the ministry’s findings, expected at the end of March.

The council’s review would be done by an independent reviewer and specific details would be made public in due course.

"In the meantime, our focus remains on identifying the source of the issue, ensuring that safe drinking water is available to affected residents, and supporting our community’s wellbeing through this difficult period."

Daily water sampling was continuing and results would be released in batches every three to four days.

He said terms of reference and who would carry out the ministry’s rapid review would be announced by tomorrow.

Meanwhile, residents of the small settlement of Hawksbury Village, near Karitane, say they feel forgotten.

Resident Kylie Scott said while it was good the village had a water tanker, it was exhausting having to constantly remind Public Health South and the council about Hawksbury’s existence.

"It’s been quite heartbreaking, sitting there and being told about Karitane and told about Waikouaiti and we have a village of over 120 residents who are all sitting here thinking ‘What about us?’

"Given we are closest to the reservoir, it is very concerning for all the residents here.

"We seem to get these scraps of information second-hand."

Life without an on-tap water supply had become a constant game of reminders.

Mrs Scott’s children used a spray bottle when brushing their teeth and the family kept reminding each other not to give their pets water from the tap.

"My sister and her 5-month-old baby are staying and we’re always reminding them to not use the water."

Mrs Scott, who is also the managing director of Hawksbury Village Management Ltd, said it was disheartening having to initiate all contact with the council, although the council was now responding.

Many village residents, who were predominantly retirees, no longer drove.

"We didn’t get containers for the water until we asked, we didn’t have the electronic sign, so I had some residents questioning whether we were really affected until we asked...

"They have responded quickly when asked but we always have to ask."

She said separate water testing in Hawksbury would be appreciated by residents.

Southern District Health Board medical officer of health Dr Susan Jack said yesterday any risk to human health from eating produce from the Waikouaiti, Karitane and Hawksbury area was minimal.

Expert advice was sought after many people expressed concerns about whether food they had grown or produced was safe to eat.

"We had recommended people wait until the results
of the blood testing were known.

"However, we are now following expert Ministry for Primary Industries advice, which is that people can continue to eat produce from this area, but that they wash home-grown vegetables or fruit in alternative sources of water."

One word Hawkins... Resign
(If you have any dignity left....if you had any to start with, that is)

How many reviews are going to be needed before the problem is FIXED?!

In all likelihood, going by other recent problems with infrastructure, there'll be $50m spent on "consulting fees" to determine that it's going to cost $5m to fix the problem ... but hey, who's counting, it won't affect our rates or taxes, eh ??