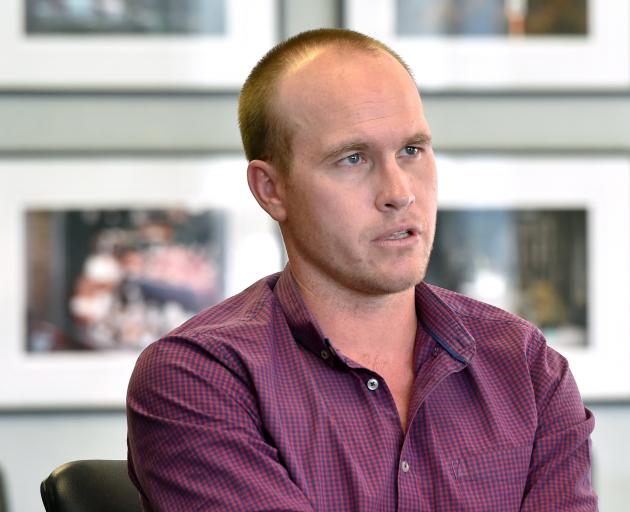 DCC group manager 3 Waters Tom Dyer. Photo: ODT
Temporary tanks will take over from tankers supplying water to East Otago communities from today, as more test results come in showing no lead in drinking water and only "background" levels in the river supplying it.

Residents in Waikouaiti, Karitane and Hawksbury have been relying on water tankers provided by the Dunedin City Council for their daily drinking water needs since the issuing of a "no drink" notice earlier this month following a series of spikes in lead levels in the water.

Mr Dyer said the water tankers were the best option for a rapid response when the "no-drink" notice was issued, but the new tanks would provide a more suitable service while the underlying cause of the lead issue was identified and fixed.

The existing water tankers would remain in place until the transition was complete, to ensure nobody was without access to clean, safe drinking water in the meantime.

With the city still at Alert Level 2, there would also be additional signage at the new drinking water tanks, to prompt social distancing, along with sanitiser and wipes.

The latest water test results were also in, and again showed no trace of lead contamination.

Samples taken at locations on the network on February 10 and 11 returned 28 results over the weekend, all of which came back with results for lead below detectable limits.

Mr Dyer said the latest results were again encouraging, but efforts were continuing to identify and remove any potential source of elevated lead readings.

Council staff had also been in Waikouaiti yesterday for the start of drop-in sessions at the East Otago Events Centre.

The sessions, which would run for two weeks, allowed staff to answer any questions residents might have.

Test results from sediment from the Waikouaiti River’s riverbed have also shown it contains normal levels of lead.

Riverbed sediment samples were taken upstream and downstream of the water intake for the Waikouaiti raw water reservoir last week as part of ongoing investigations into the source of elevated lead levels in Waikouaiti and Karitane’s drinking water.

The two results for lead showed 5.3mg/kg upstream of the intake and 4.9mg/kg downstream.

The difference between the sites was not likely to be significant.

The results were significantly below the Australia and New Zealand Government default guideline value for heavy metals in sediment, of 50mg/kg for lead, Mr Saunders said.

The sediment results were good news.

“These results suggest that the Waikouaiti River is in generally good health with regards to concentrations of lead."

Any new information that helped rule out lead contamination from the river was a step towards certainty for the affected communities.

“However, at this time we are not ruling out the possibility of a source of lead contamination in the river until more data has been collected. The [Dunedin City Council] is sampling more widely in the catchment with input and assistance from the [regional council], and we look forward to learning more from these tests,” he said.