It broke new ground yesterday, though, when it became an emergency medical centre. 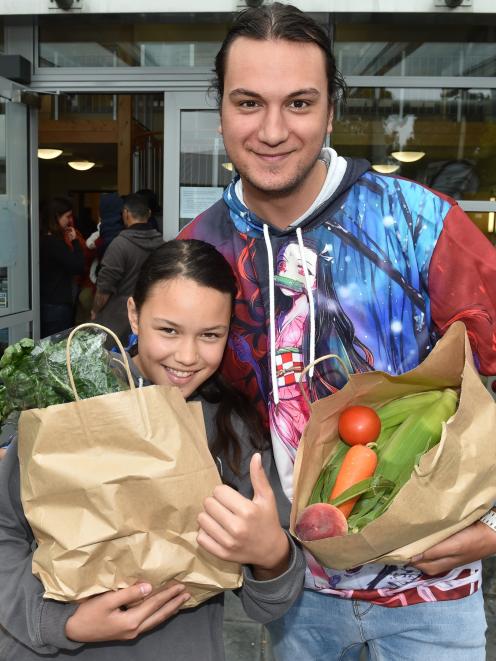 Paikea Hunter (11) and big brother Ammon stock up on produce after getting a blood test at the East Otago Events Centre yesterday. PHOTO: GREGOR RICHARDSON
A slow but steady trail of residents from Waikouaiti, Karitane and Hawksbury progressed through the centre yesterday, answering a call from the Southern District Health Board to get their blood tested for abnormal lead levels.

Any and all were accepted for testing, although people with children were asked to come in yesterday and today because testers who specialised in taking blood samples from youngsters were on hand.

Ammon Hunter, who brought his little sister Paikea with him for testing, was philosophical about the unexpected upheaval the scare about tests showing high lead levels in the town’s water supply had created.

"It’s just the way that things have turned out, but at least we have this facility set up here and the staff were really nice," he said.

"We didn’t have any concerns before, but once the news came out we thought we had better get tested pretty quickly."

Amanda Bernhardt said she had moved to Waikouaiti a year ago, and had experienced a range of health issues since.

Whether or not potential lead poisoning was the cause of her woes, she was determined to get tested early so she knew one way or the other.

"I had noticed a metallic taste in my mouth, which I thought was dental but my dentist said no.

"I’ve had blurred vision and extreme constipation and dehydration, so I’ve been drinking water all the time, and a foggy brain and forgetting things I wouldn’t forget.

"I’d like to find out if this is the cause."

"When I heard the news I thought, ‘Wow, I had better get a test for my own wellbeing’ ... it was a bit scary."

Residents will now have to wait from two to four days for their test results to come back.

In the meantime, they will have plenty to do, cooking up the plentiful supplies of fruit and vegetables made available to them free of charge in case lead had contaminated the produce from their home gardens.

"I didn’t realise the vegetables were a thing until I got here," Ammon Hunter said.