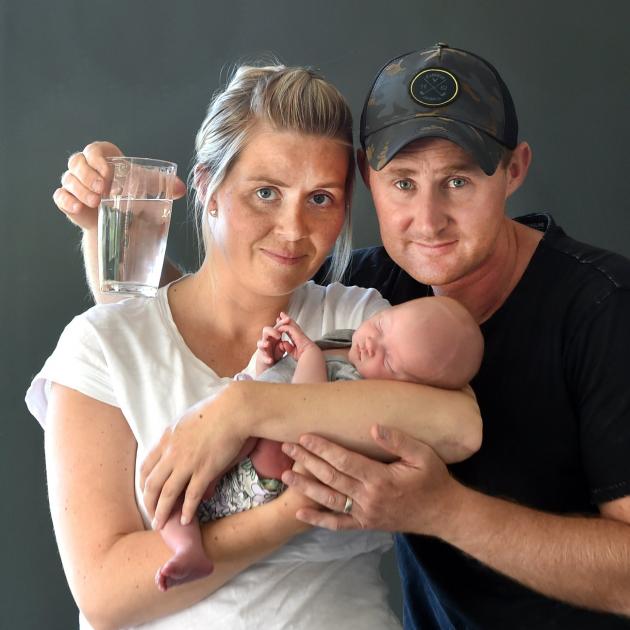 Today, she will get a blood test to check for levels of lead in her system.

Parents Richard and Rachel Olsen, of Waikouaiti, were horrified to hear some of the water Mrs Olsen had been drinking during her pregnancy might have contained high levels of lead.

Mr Olsen said it had not been an easy few days for the first-time parents.

"For a foetus or baby no level of lead is safe ... It’s been a very worrying week.

"We never even thought about the water we were drinking.

"I encouraged [Rachel] to stay hydrated throughout December and January."

Mr Olsen said his wife and baby would get blood tests this morning, and were told their test results would be fast-tracked.

"We’re very worried about the outcome of those tests.

"We’ve been told some of that lead is going to get through ... You look up some of the long-term effects and it’s hard not to think the worst.

"I don’t think I’ll drink the water in Waikouaiti ever again, my trust is gone. The Dunedin City Council’s sold us up the river."

Others in the small communities of Waikouaiti and Karitane are still reeling from Tuesday’s announcement.

Online, people were expressing concern about their children and pregnant partners’ health.

Karitane School board of trustees chairwoman Jane Schofield said there was a lot of speculation and concern about getting the source of the lead identified, the length of time they had been exposed, and what it meant for people’s long-term health.

Waikouaiti resident and political commentator Morgan Godfrey said senior leadership at the city council needed to take responsibility for the processes and systems that he believed failed the community.

"This is possibly a public health disaster ... Heads should roll.

"There are thousands of people who rely on the water supply at Waikouaiti and each and every one of us were put at risk."

"Heads should roll" was a common phrase being

uttered by residents of the two towns yesterday.

In response, Dunedin Mayor Aaron Hawkins said the council and its staff were focused at present on fixing the immediate problem.

"We have followed the advice of public health authorities all the way through this, just as we have with our local Covid-19 response," he said in an emailed statement.

"There are certainly things we could change internally, and in some cases already have, but our focus at the moment is on finding the source of the contamination, fixing the problem and supporting the community."

A thorough review of the event and response, across all authorities, would be essential, he said in an email.

Other repercussions of the water crisis were being felt yesterday.

Employee Margaret Meikle said it had been expecting 250 people to stay this long weekend, but had more than a dozen cancellations since Tuesday.

"It is disappointing, we’ve had this ... impacting us."

The council response was more than she expected.

"We’ve had staff [from the council] visiting us every day."

A tanker was parked across the road from the camp, and another would be brought into the camping ground before the weekend.

I have had family who lived in Waikouaiti for many years, who boiled and drank Waikouaiti water during that time, it has always been known by residents and visitors that the water was foul tasting. while this brackish earthy tasting water has been an issue in its own right, it is doubly disturbing to read previously claimed 4% over the limit lead contamination is actually now correctly identified as being 40x over the limit...! DCC, over how many years has this been an issue, have high levels of lead been present on and off, or consistently an issue, potentially undetected for years...do you know? Should those who have lived there in the recent past but now live in other centers also be tested...?

This is such a worry for you. So sorry to hear this. I use an under-sink inline water filter. The one I use removes chlorine and heavy metals and improves taste. Installation was maybe $200, and a new filter every two years is about $80. Could you do this instead of abandoning the water supply completely?