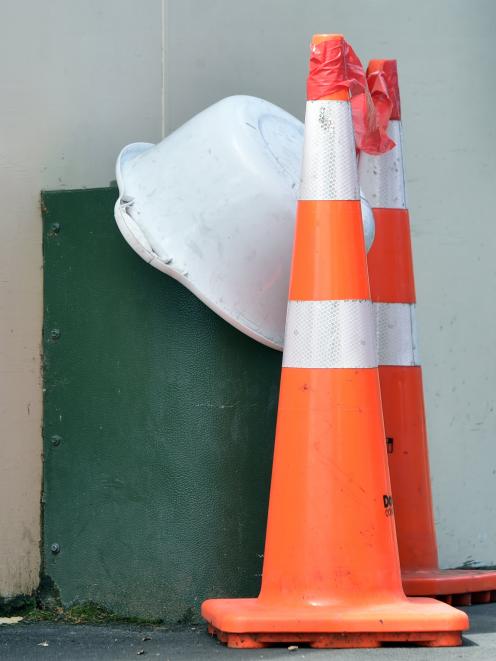 The drinking fountain at Waikouaiti School has been closed.PHOTO: PETER MCINTOSH
The Dunedin City Council has supplied the following updated  information on the events that  led to    Waikouaiti and Karitane residents being told on Tuesday not to use tap water for drinking, cooking or preparing food, until further notice.

Dunedin City Council infrastructure services general manager Simon Drew says it is important for residents to understand the do-not-drink water notice has been issued as a precaution, based on public health advice.

Mr Drew said six samples out of 90 taken over the past six months had returned results with elevated levels of lead. The first of these was received on August 13, 2020. After a verification test, and consultation with our independent drinking water assessor, it was determined this was a one-off spike rather than any indication of a widespread issue. Regular sampling continued and at that stage, there was no evidence of continuing elevated levels of lead in the water.

Any decision to issue a no-drink-notice is made based on expert public health advice.

All of the results with elevated lead levels received by the DCC were sent to an independent drinking water assessor (contracted by the Ministry of Health) and decisions made in consultation with them.

The key result that led to the no-drink-notice being issued was from a sample taken at the Waikouaiti reservoir on January 20, 2021. The sample result was received by the DCC on January 29 and forwarded to the drinking water assessor. On February 1, Public Health South called a meeting to discuss the appropriate course of action. That meeting took place on the morning of February 2, and the DCC received advice from the Medical Officer of Health that all consumers on the water supply should be advised not to use tap water for drinking, cooking or preparing food until further notice. We acted on that advice immediately and put a range of measures in place to inform residents and provide safe drinking water.

The DCC carries out all water sampling required under the national drinking water standards, set by central government. In addition, to maintain safer drinking water, the Ministry of Health, the DCC and all other councils regularly remind all residents to run water from all drinking taps and filters for a few minutes each day to remove any metal traces, such as lead from plumbing fittings.

In July last year, the DCC began taking additional samples of the Waikouaiti/Karitane water supply for asset management purposes, namely to check how corroded the pipe network was. This sampling was undertaken at four sites: the Waikouaiti Water Treatment Plant, Waikouaiti township, Waikouaiti Golf Club and the Karitane Bowls Club and was not expected to detect elevated levels of lead.

A result from the Waikouaiti Golf Club received on August 13 showed elevated lead levels. This is not completely uncommon, as lead can occur in water due to corrosion of old pipe fittings and private plumbing fixtures.

On receiving the results, we notified our independent drinking water assessor and put in place an increased sampling and pipe-flushing plan. Flushing helps to remove metal traces from pipes. In consultation with the drinking water assessor, this action was considered appropriate until more data could be gathered.

During the next 14 weeks, lead tested well below the acceptable limits, except for one result at the Waikouaiti Golf Club on October 9. This trend indicated that the result received on August 13 may have been an isolated incident at a localised point on the network.

The next result which returned elevated levels of lead was from samples taken on December 8 at the Waikouaiti Golf Club and Karitane Bowls Club.

Sample results take around 10 days from the day of sampling. Therefore, the results of the December 8 samples were emailed from the lab to the DCC on December 18.

Unfortunately, because this sampling had been for asset management purposes rather than for drinking water standards monitoring, the email was sent to an inbox not being monitored while the staff member was on leave.

We realise this will be of little comfort to Waikouaiti/Karitane residents. We have made an immediate change to our operational procedures to ensure that lab results which exceed safe drinking water guidelines, regardless of the intended purpose of the sampling, are sent to a monitored inbox. We have also put a procedure in place to ensure that the lab actively flags to us results which exceed safe drinking water guidelines.

When staff picked up the results on January 7, we notified the independent drinking water assessor. Again, the expert advice we received was that more sampling and investigation was required to determine the extent of the issue. Public Health South concluded that public notification was not yet required.

The most recent sample to indicate high levels of lead was taken at the Waikouaiti raw water reservoir (at the Waikouaiti Water Treatment Plant) on January 20. We received this result on January 29 and again notified the independent drinking water assessor (contracted by the Ministry of Health).

The result at the Waikouaiti raw water reservoir was the first time we had received results showing elevated lead levels at the water source.

On February 2, we received advice from the Medical Officer of Health that all consumers on the water supply should be advised not to use tap water for drinking, cooking or preparing food until further notice. We acted on that advice immediately and put a range of measures in place to inform residents and provide safe drinking water.

■ Detailed information regarding test results, once it is available, will be made available on the Dunedin City Council website: www.dunedin.govt.nz.