She had been boiling it for months because she believed it could be contributing to her stomach problems and she did not know there was almost four times the normal amount of lead in her water supply that day.

Or that boiling water increased the concentration of lead in it.

She was appalled almost two months later, on Tuesday, to be told not to boil or drink her water as the Dunedin City Council was investigating a spike in lead levels.

"It was absolutely horrifying to hear ... it’s a dereliction of duty we did not find out as soon as someone knew something about it."

Ms Carlson, who had lived in Waikouaiti for 21 years, said there had always been problems with water in the area.

"It tastes muddy, it’s not pleasant ... everyone in the community is aware of these issues.

"I thought it wouldn’t hurt to [boil the water].

"It’s infuriating to then find all this out.

"We’re ratepayers but it feels as though we have been abandoned ... now there is this, too." 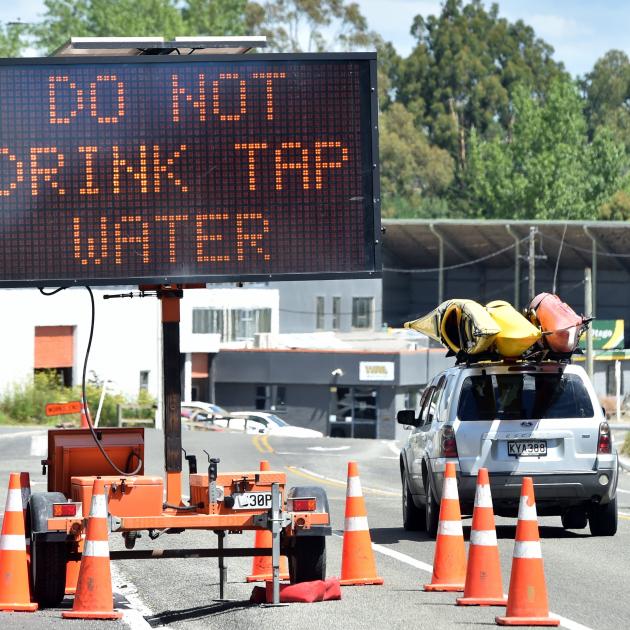 A sign at the northern entrance to Waikouaiti warns not to drink the water. PHOTO: PETER MCINTOSH

Her grandchildren had come to visit her at Christmas, and she had given them boiled water.

Her story is a common one.

Many residents in Waikouaiti and Karitane spoken to yesterday said there had been issues with water and pipes in the area for years.

Waikouaiti resident Liz, who only wanted her first name used, had lived in the area for 24 years, said the water had always tasted funny.

"At times there has been sediment in the water ... The pipes are constantly bursting.

"It doesn’t surprise me this has happened. It all shows a lack of care about our pipes," Liz said.

Stewart St, where she lived, had not been included in water pipe renewals to the area in the 1990s, and residents felt they had been overlooked.

Karitane School board of trustees chairwoman Jane Schofield said she had been driving to Dunedin for consumable water for 12 years, and knew others who did the same.

She was horrified to hear of lead in the water.

"It’s the fact that we weren’t told of it until almost two months later that is really upsetting.

"People should be told of information like this even if it is a spike.

"Babies are bottle-fed with that boiled water."

A Hawksbury Village resident, who did not want to be named, said people there had been complaining about a strange taste in the water for months.

In October last year, council 3 Waters group manager Tom Dyer attended a Waikouaiti Coast Community Board meeting at which he was presented a glass of local water to drink.

He drank it, noting it had a different taste.

On Tuesday, when asked about that taste, he said he did not believe it was related to the December spike in lead levels.

"We’ve had taste and odour complaints in the Waikouaiti area for some time.

"They were unrelated to any soluble lead."

Community members say the council has been told of their water concerns for years.

"People are not happy, people are confused, people are wondering how long this is going to last and we don’t have those answers at the moment.

"The council still don’t have all of the answers either but we do want them to be shared as soon as they can."

The board had sent a list of questions to the council on behalf of the community.

Former Waikouaiti Coast ward councillor Andrew Noone said the water issue had been raised before and a considerable amount was spent upgrading the Waikouaiti water treatment plant in the 1990s.

Schools in the areas were open yesterday.

Waikouaiti School principal Mark Edwards said the council had informed the school of the issue and delivered enough water for pupils and staff.

It is understood up to 40 council staff spent yesterday afternoon door-knocking, dropping off leaflets and water.

While there is acknowledgement the council has started pipe renewals in Karitane and Waikouaiti is included in future budgets, residents say they will believe the problem is fixed when they taste it.

Symptoms to watch for outlined

"In young children and babies, low levels don’t cause any obvious illness.