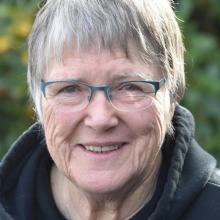 Lynley Hood
A petition calling for Lime e-scooters to be recalled - like any other defective product - is being taken to Wellington by Dunedin writer Lynley Hood.

Dr Hood is the co-convener of the Dunedin Pedestrian Action Network and a trustee of the Visual Impairment Charitable Trust Aotearoa (Victa).

Speaking during the public forum at the Dunedin City Council infrastructure services and networks committee meeting this week, Dr Hood questioned whether the council
had been ''conned by a snake-oil salesman'' into allowing e-scooters on to city streets.

They were permitted to be operated on footpaths, despite concerns about their ''frightening speed'' and the potential for faulty brakes, suspension and other inadequate safety features, she said.

In the United States, Lime was introducing new models with improved features, but not in New Zealand, where people were being used as ''crash-test dummies'', she said.

The city needed to ensure its footpaths were safe spaces for all, meaning e-scooters should be forced off footpaths, on to cycleways, and their riders encouraged to operate them with courtesy and respect.

The city also needed more time to plan for their future use, Dr Hood believed.

To achieve this, the Ministry of Business, Innovation and Employment could initiate a compulsory product recall - on the basis the devices could cause injury to people - to remove them until issues were resolved.

Dr Hood was circulating a petition calling on Commerce and Consumer Affairs Minister Chris Faafoi to do just that, and she urged the councillors to sign it.

Her move came after a spike in minor and more serious injuries followed the introduction of Lime scooters in Dunedin and other centres.