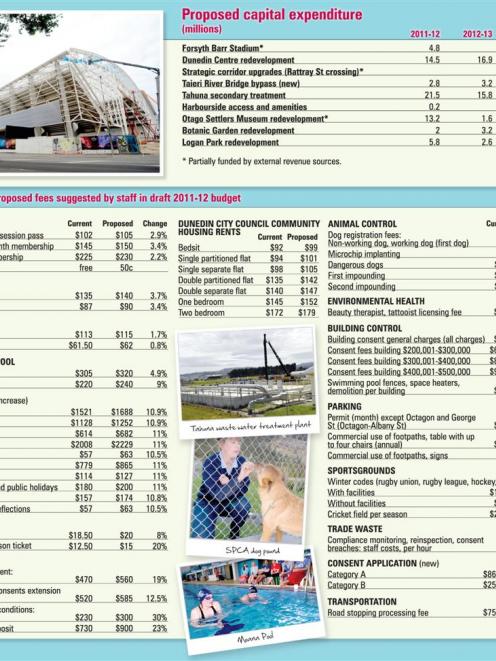 debt_means_continued_prudence__4d302caa41.jpg
Dunedin city councillors sit down next week to grapple with the first year of a projected rates hump that will last the term of the present council.

The elected representatives' test will be to strike a balance between controlling spending - and therefore the burden on ratepayers - while guiding the city forward.

The Dunedin City Council's books say its net debt bill will plummet by about $110 million in the next financial year - but that is only part of the council's debt story.

The drop comes when council-owned Dunedin Venues Ltd takes control of the Forsyth Barr Stadium and responsibility for any debts that go with it.

Council chief executive Jim Harland, who leaves the council for a new job at the New Zealand Transport Agency on January 21, said the figures reinforced the need for "continued prudence".

The council could end the decade with roughly half the net debt of 2010-11 - but "the challenge in meeting that future" was linked to whether this and new council's decided to embark on any new, big-ticket projects, he said in a briefing.

The pre-draft plan he released shows the debt spike is fuelled by $51 million of new borrowing in the coming year - and $42 million and $24 million thereafter - to pay for major projects over the next three years.

Debt interest as a proportion of the council's total revenue will drop as the debt is repaid, but it will not drop below the council's 8% limit until 2017-18.

The plan suggests the council will have an eye on that debt as it budgets for $1.9 million growth in operational costs, and considers how to manage depreciation expenses that are expected to climb by $2.3 million.

Council finance and corporate support general manager Athol Stephens said transferring Forsyth Barr Stadium to DVL would affect about $139 million of stadium-generated debt, of which about $30 million would be met by DVL's private sector fundraising.

The stadium would get a transfer value pending its transfer in January and the difference between the valuation and the $139 million debt the council would repay would be left as a "shareholders advance".

That would attract an interest rate and interest payments to the council. The first, of $3.166 million, would be made this financial year and would be followed by a "subvention" payment from the council for exactly the same amount.

The payment would start life as income before becoming an operational cost in a ledger where additional costs, including for wastewater treatment at Tahuna and Green Island ($332,200), housing ($330,200), maintaining and operating property ($368,500), and transport operations ($296,100), help add another $1.9 million to the expenses budget.

Mr Stephens said road maintenance programme costs allowed for inflation and the maximum subsidy available from the New Zealand Transport Agency, while costs for the Tahuna wastewater treatment plant (were) to cover the likes of chemicals, UV maintenance and sludge disposal in the wake of the stage two upgrade.

The Tahuna secondary treatment plant upgrade, and the redevelopment of the Dunedin Centre, the Otago Settlers Museum and Logan Park - the big items in a $144.4 million capital expenditure programme that was last year estimated at $111.3 million - would add to debt and to non-stadium loan interest, which was expected to increase by $5 million.

The council's stadium interest expense budget reduces by $4.8 million because it will be sold to DVL after completion. From then, the debt will sit with DVL, Mr Stephens said.

External revenue - from funding agencies such as NZTA, and from council service charges - would drop from $106 million to $83.2 million even as a group of council charges increased.

This year's figures included about $20 million contributed to the Forsyth Barr Stadium by external funders, including the Otago Regional Council and the Otago Community Trust.

The wastewater treatment income budget would be $319,200 worse off because of the impact of the council's trade waste bylaw, and the Chinese Garden could earn $289,000 less than expected as the attendance target was slashed from 60,000 to 40,000.

The council expected to make $623,000 more from its property investments, and $325,000 more from water charges based on the rate of consumption during this financial year.

Total expenditure was expected to increase from $199.2 million to $205.35 million, below the rates-buoyed total income of $227 million for the year.