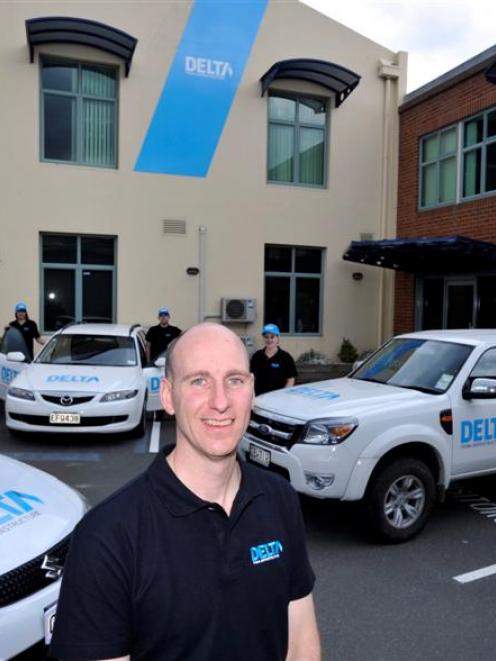 Delta chief executive Grady Cameron and staff members (rear, from left) Virginia Carter, David Warriner and Amanda Windle stand with vehicles and a building displaying the company's new logo. Photo by Gregor Richardson.
The Dunedin City Council-owned infrastructure specialist company Delta has a new look, and its chief executive believes the company can continue the growth it has experienced in the past year.

"The new look is the next step on Delta's growth path as we expand and diversify our business and take up the significant challenges to improve, renew, and expand the country's infrastructure," chief executive Grady Cameron said.

Mr Cameron said with the Government's national infrastructure plan showing high expenditure across areas like energy, waste, water, communications, transport and land infrastructure, the company was well placed to take advantage of the opportunities on offer.

He said the company saw "significant opportunities" with lignite in Southland, and oil and gas exploration in the Canterbury Basin.

The company has in recent years taken contracts outside Otago, and Mr Cameron said that was "absolutely" something that would continue.

While that company was not from Dunedin, Mr Cameron said local companies were involved.

He would not say what targets the company had for growth, or reveal the costs of the logo change across the company.

But he said the growth would benefit Dunedin ratepayers through dividends to the council that helped reduce rates.