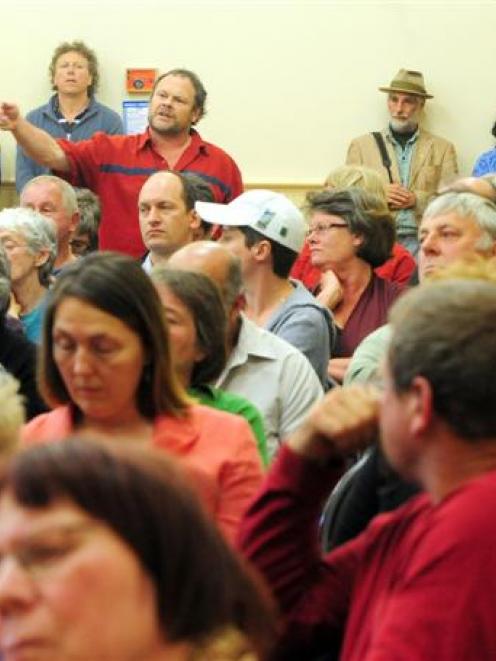 A member of the crowd argues against the stadium project. Photo by Craig Baxter.
There were calls for a city-wide referendum to decide the fate of the planned Otago Stadium after howls of protest were directed at the project during a public meeting in Port Chalmers, Dunedin, last night.

The meeting was called to allow the area's Dunedin city councillor, Cr Andrew Noone, to explain his commitment to the $198 million stadium project, and address the concerns of ratepayers from Port Chalmers and surrounding areas.

Answering questions in front of a crowd of about 150 - all but a handful of them opposed to the project - Cr Noone said there was "no plan" to stage a referendum to decide the stadium's fate.

That was because the public had been encouraged to make submissions on the stadium during the 2008-09 annual plan hearings process, a draft of which was first delivered to "every household in the city" in March last year, he said.

Despite vocal opposition, it was his view that a majority of Dunedin residents and ratepayers supported the construction of the stadium, he said.

"The feedback I'm getting is about 60% support it and about 40% are against," Cr Noone said, prompting cries of "put it to the test" from the audience.

And those attending the meeting voiced their frustrations by voting unanimously for Cr Noone to urge his fellow councillors to stage a city-wide referendum on whether to proceed with a rates-funded stadium.

The referendum should be held prior to April 20, their resolution said.

The full council is expected to vote on that date on whether to approve a guaranteed maximum price contract for the stadium's construction.

Speaking after the meeting, Cr Noone told the Otago Daily Times he would "certainly" be taking the message to Mayor Peter Chin and council staff for advice, but was not sure about such a tight timeline.

"We need to get, obviously, some legal advice on the practicality," he said.

Mr Chin last night said it would not be appropriate for him to comment until he had spoken to Cr Noone.

Earlier, responding to the vocal and sometimes angry crowd, Cr Noone said he weighed public opinion - like that expressed at the meeting - against survey results, issues of affordability and the future of the city when making his decision on how to vote.

Those in the gallery demanded answers to a range of questions, from the cost of stadium foundations and realigning State Highway 88, to its multipurpose usage, its susceptibility to sea level change and whether the council had a mandate to press ahead with the project.

One man asked how Cr Noone could still support the project when conditions such as the project's original $188 million price-tag - now up by $10 million to $198 million - had not been met.

Cr Noone argued the project's guaranteed maximum price had always been for stadium construction costs, not land purchase prices, which accounted for the additional $10 million.

Asked what could change his mind on the stadium, Cr Noone said any increase above the project's guaranteed maximum price would prompt him to vote against the stadium, and "I would like to think" other councillors would also "stand firm" on that, he said.