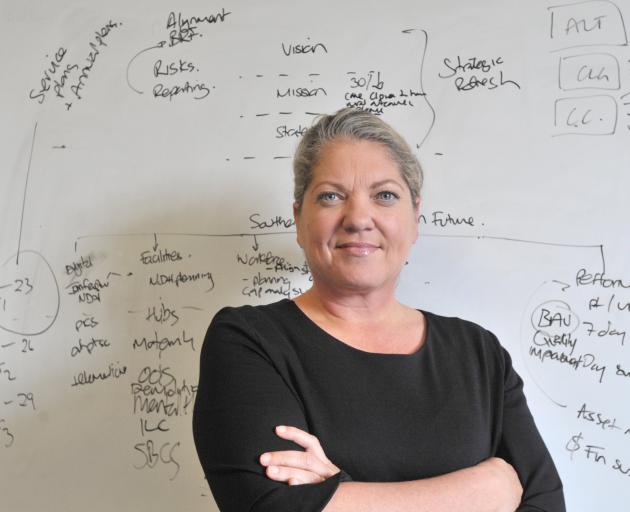 She has been called evil, heartless and a witch ... but despite that, departing Southern District Health Board executive Lisa Gestro says she will still look back on her time in the South fondly.

"I am a completely different person, I have learnt so much, not only about health and our team but about myself personally," she said.

"It has been the most challenging and most rewarding part of my career, unquestionably."

Most of the opprobrium heaped on Ms Gestro came early on in her stint as executive director primary, community and strategy.

Included in her remit was a review of midwifery services in Otago and Southland which, controversially, recommended a change of status for the Lumsden Maternity Centre.

Community outrage at what was perceived as a downgrade boiled over, Ms Gestro frequently becoming the target of online abuse.

Despite the vitriol, she said that she never doubted herself.

"I probably reflected on the way that I managed myself personally through all of this. It does take some kind of resilience to keep stepping it through, but no, there was never any doubt about doing the right thing. The rest was just fortitude."

In part such passions came with the territory of being a health administrator, Ms Gestro said — health was regarded as vital by everyone, in particular child health.

However, the height of those passions was "distinctly southern" she felt.

"I think it is admirable, but I definitely think it is more heightened here than I have experienced in other DHBs and that adds another dynamic.

"It is great that people are interested, and some of the absolute complexity of jobs like this is about being able to convey careful messaging around why sometimes money needs to move if we are going to do our best and following priorities and need, and that’s not always comfortable for people."

Ms Gestro’s role included helping to set the strategic direction for the health board, and oversight of its interaction with both primary practice and community health initiatives.

Initially, that involved consultation on and then implementation of the SDHB’s primary and community strategy, a document which she was pleased to see anticipated many of the recommendations in the government-commissioned Simpson report on the health system.

For the past 12 months, though, Ms Gestro and her colleagues have been embroiled in the largest community health challenge New Zealand has faced in decades: Covid-19.

"I think there is something about health that means that no matter how ready or unready you are, we just make it work: we are notoriously good in a crisis, and that absolutely proved to be the case," Ms Gestro said.

"Personally, I was not ready at all, I just didn’t see it coming and each day brought a whole new series of challenges.

"The teams worked relentlessly, there was an unwavering commitment to getting the job done, and I would say that was true of all parts of our system ... we were blessed to have really good, sound people who were able to mobilise really quickly.

"Of course, it came at the expense of a whole heap of other things and there was a lot of day-to-day prioritisation around what we did or didn’t do and, sadly, we are still catching up on a lot of that."

A lot of "that" is low-profile but still important health initiatives; the regular reports Ms Gestro drafts for the board include updates on breastfeeding rates, oral health, before school checks and smoking cessation programmes.

"They are the ‘non-sexy’ targets because not acute, but of course those are the ones that we should be emphasising because they are so instrumental to our downstream health issues ... we get so distracted by urgent, present, right now treatment as opposed to prevention," Ms Gestro said.

"All the evidence suggests that if you invest in 4-year-olds, the outcome is so much more different, and we need to think more about future than the present system and the churn we are in now."

Although Ms Gestro departs for a new, senior management role in Waikato with most of her to-do list ticked off, one major regret is that she will leave without the SDHB’s ongoing review of its mental health services completed.

"It is imperative and I am genuinely investing the vast remainder of my remaining energy to make sure that is something that is going to be really embraced by the executive and the board in terms of what needs to happen, because we should not underestimate the size of the change that is required."

"I am a completely different person, I have learnt so much, not only about health and our team but about myself personally,"

And that's the problem ... "I have learnt so much" ... The "stuff" you learnt, you should have known BEFORE being given the position. This statement just reinforces my opinion that there are a lot of highly paid people running companies, SOE's, councils and unfortunately, the country, who have not learnt enough or had the experience to be in the positions they are ... it's the almighty dollar they're chasing and don't really give a toss about the people they are supposedly managing or attempting to help.

As for the new hospital in Dunedin, the biggest cost is probably going to be the architects, planners and consultants who are more interested in making the place LOOK like its something to be proud of, unfortunately, that is the priority, not patient care ... patients will still be dying on gurneys in the hallways while "those" people try to make up their mind whether they can afford to have another patient seen by a specialist or a bed in a ward.

I truly hope that Waikato is prepared for another "learner" driver ... un-bloody-believable !!