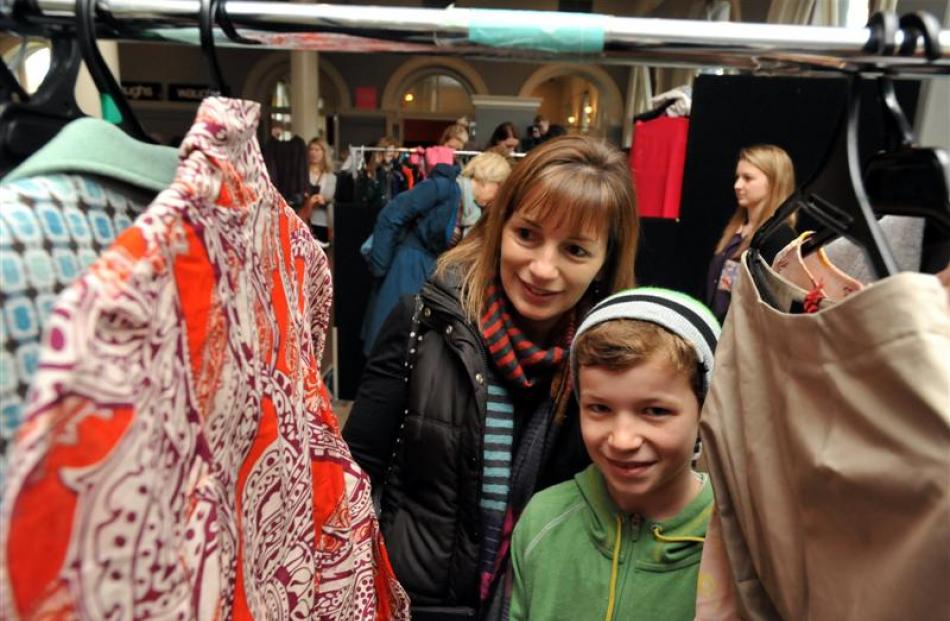 Dunedin woman Rebecca Meikle and her son Sam browse through clothing racks at the iD Designer Sale in the Dunedin Railway Station on Saturday. Photo by Gregor Richardson.

It is not about what was spent but what was saved at the iD Designer Sale in Dunedin on Saturday.

Karen Walker jewellery for $20 - think of the saving! Less than half price Charmaine Reveley, ditto.

More than 100 people were queueing outside the Dunedin Railway Station Porters' Lounge before the sale opened at 9.30am, and a steady stream of shoppers browsed clothing racks and accessory-laden tables until the doors closed at 1pm.

iD committee member Cherry Lucas said those involved were thrilled about how successful the sale was.

''We reckon about 95% of people left with something. Nom*D only had about 30 pieces left, the clothing racks were stripped and everyone was really happy,'' she said.

A group travelled from Auckland especially for the sale, which attracted a younger crowd than usual, Ms Lucas said.

The new location, closer to the student quarter and beside the Otago Farmers Market, brought in extra shoppers, she said.

It was also the first time the sale had been held on a Saturday.

Dunedin woman Rebecca Meikle, who browsed the racks with her 11-year-old son Sam, said it was the first time she had been to the annual event.

Others have flocked religiously to the sale since its inception.

For many, it provides the best opportunity to own coveted designer garments and claim a piece of Dunedin fashion from labels including Nom*D, Charmaine Reveley, Waugh's and Dada.

Jane Sutherland and Claire Bloom represented Central Otago chic, and a selection of pieces by Auckland designers Karen Walker and Kate Sylvester were offered, as well as swathes of fabric for the more hands-on fashionistas.