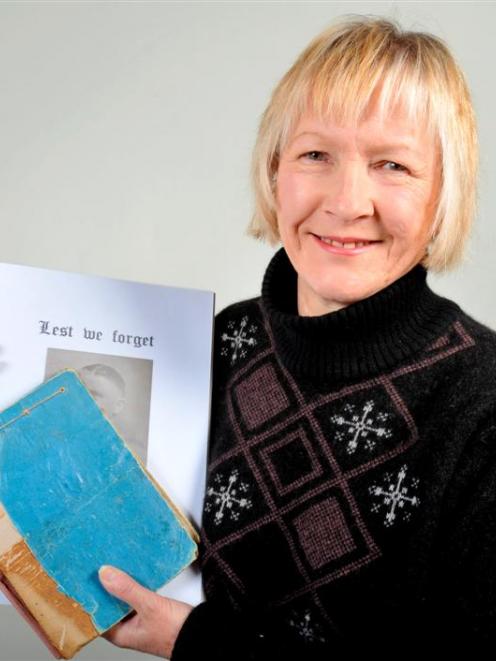 Margaret Pollock (59) with the original version and a digital version of her late father's diary of life in European prisoner of war camps during World War 2.
It's an old and battered little blue book, held together by pieces of string and sticking plasters.

Clutching it close to her chest, Margaret Pollock says it looks humble on the outside, but it has a life on the inside that all young people should read about.

It's the diary of her late father Laurence Pollock, written during World War 2, when he was a prisoner of war in German, Polish and Italian POW camps.

Mr Pollock was serving with the 20th Battalion, 2nd New Zealand Expeditionary Forces in North Africa when he was captured by German forces, and although it was forbidden to keep diaries in the POW camps, he risked his life to record details of life behind the wire fences.

Miss Pollock said the diary showed what the POWs were fed each day, the ablutions, being strip-searched and being forced to march barefoot and naked in snow and ice.

It also described how a prisoner was stripped naked, shot and hung on a barbed wire fence for several months as a deterrent to breaking the camp's rules. 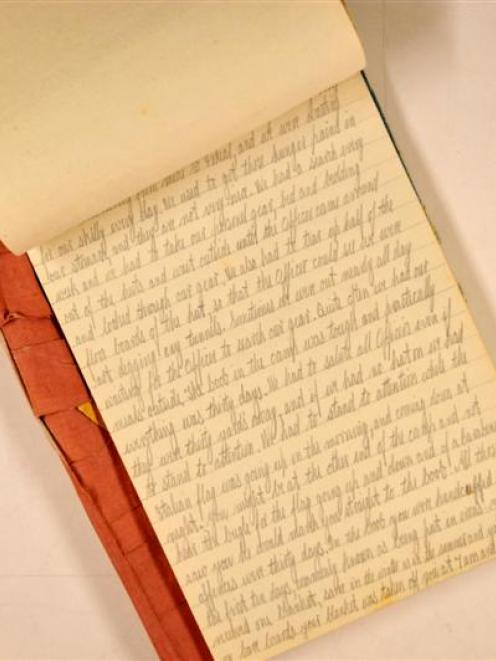 Photos by Gregor Richardson.
''My father was a very fit man before he left for the war. He used to play rugby for Otago - he was in a really bad way when he came home.

''Dad used to say he could hang his hat on his collar bone.''

Given that returned servicemen's numbers were dwindling, leaving few to tell their stories of horror and survival to future generations, Miss Pollock believed diaries like her father's might help to bridge the gap and continue the dissemination of information.

She believed Anzac Day was an appropriate time to urge families with similar artefacts gathering dust at home to take them to libraries such as the Hocken Library in Dunedin, where they could be preserved and made available to the public, rather than being destroyed or lost.

Miss Pollock discovered her father's diary after he died in 1989. It was among old POW magazines and newspaper clippings in an old wardrobe, and she believed other families may have similar artefacts.

''I thought, what's going to happen to all dad's stuff once I go? It would be such a shame to lose it. I want people to know what happened and what these men went through.''

She plans to give the artefacts to the Hocken Library in the hope they would be preserved for future generations to explore, and she recommended other families do the same.

''It's so important for the young people today to know about what happened and why so many men lost their lives.

''Without this information, they won't get the vivid pictures like the ones we have been lucky to get.''

Hocken Library archives curator Anna Blackman welcomed any Dunedin or Otago-related material, and said library staff would provide advice about other places where artefacts could be sent.