A dirty job, but they did it 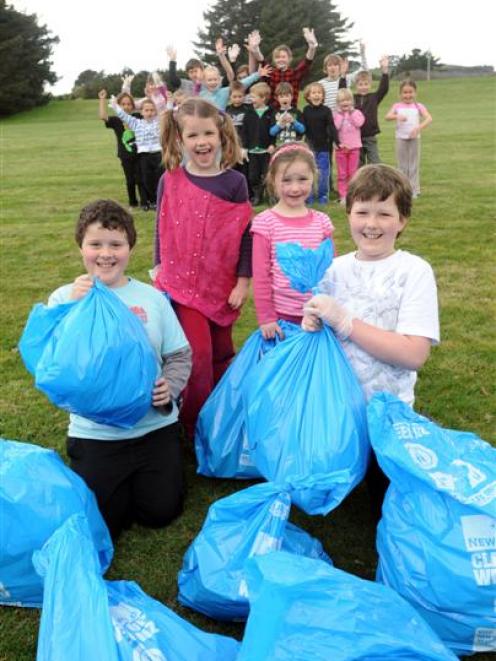 Dunedin's Rotary Park School pupils (front, from left) Nathan Farr (9), Ellie Jones (6), Ella McLeod (5) and Hamish Oskam (9) and their schoolmates get into the spirit of Clean Up New Zealand Week. Photo by Peter McIntosh.
It is not every day you see 70 school children equipped with blue rubbish bags and rubber gloves, but Dunedin's Rotary Park School pupils donned their disposable gloves for a cause yesterday morning.

The children scoured the Rotary Park public reserve next to the school in search of rubbish for their contribution to Clean Up New Zealand week.

"They were really good about it too because it's quite yucky doing this sometimes."

The amount of rubbish surprised her.

"At a glance, there didn't seem to be much, but when we got on our hands and knees there was heaps."

The school decided to clean up Rotary Park because it was in its backyard and was used by the children and their families.

Ebony James (9) said it was good to clean up the park because people walked their dogs there.

"Some of us also went through the school playground and picked up all the sticks ... at playtime."

The Rotary Club of Dunedin Central and supporters were out in force in Dunedin on Saturday, picking up rubbish in a section of the Kaikorai Stream and at Second Beach.

Club president Neville Hall said such events were another way for the club to give back to the community.

Three skips placed by the Saddle Hill Community Board in Brighton, Waldronville and Fairfield were filled by the community during the weekend.

"People obviously took the challenge, collected loads of rubbish and also took the opportunity to clear out their own backyards too," he said.

Items dumped included lawn mowers, a fridge and a microwave.