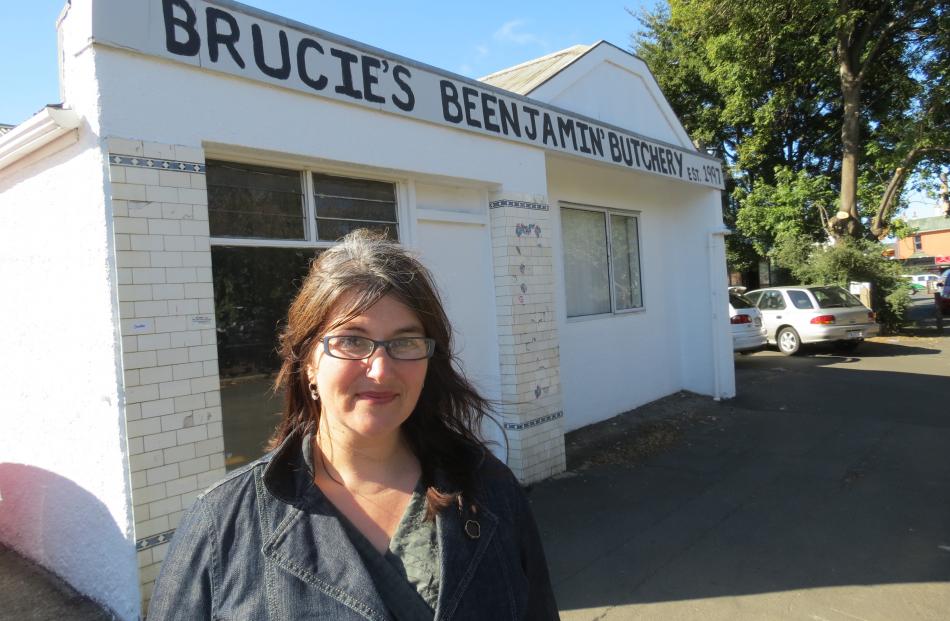 Dunedin Flatnames researcher Sarah Gallagher visits one of the many named flats in the city. Photo by Jonathan Chilton-Towle

Footrot Flats, Pink Flat The Door, The Debacle, these are just a few Dunedin flat names that have passed into something of a legend among the student community.

Discovering the history behind the names has become the passion of librarian Sarah Gallagher, who is working on a book about the subject.

So far she has identified and photographed more than 200 named flats, and uncovered the stories behind many that no longer exist.

''I'm sure there are lots that I don't know about. There are new ones popping up daily,'' she said.

Some of the flat names, such as ''Footrot Flats'' in Clyde St, have been around since the 1970s but the tradition seems to have existed for longer than that.

Mrs Gallagher has unconfirmed reports that the ''Light House'' in the Heriot Row area had been around since the 1950s. She had also interviewed some who had lived in a named Leith St flat ''the batch'' in the 1930s.

The flat-naming phenomena could sometimes be puzzling. Some signs came and went while others moved from place to place. Occasionally the signs were changed multiple times in a flat's history, she said.

In some cases, students were seeking corporate sponsorship for the flats and this was reflected in the signs.

In many cases, the meaning behind the name had changed or was lost.

For example ''The Debacle'' in Cumberland St had originally been named for a particularly riotous toga party, which had led to the cancellation of the event for the next year, and had been reported as a debacle by international media. Today, the meaning of the name apparently referred to the state of the flat itself, Mrs Gallagher said.

The idea began as a group project for one of Mrs Gallagher's master's degree papers in 1999 or 2000.

The interest stayed with her and she began photographing named flats and posting them online.

The huge reaction to these posts convinced her to start a book about it.

Naming flats was part of Scarfie culture and did not occur on a large scale anywhere else in New Zealand, she said.

''Living in a named flat gives people some kudos with other students ... it's about becoming part of the university story.''

Mrs Gallagher has her own experiences of living in a named flat. When she began her studies in 1991 she lived in ''Mouse House'' at 888 Cumberland St. The house, which had now lost its name, had the title because it was run down and had ''heaps of mice''.

The residents kept a running tally on the wall of all the vermin they killed.

• If you want your flat name to be recorded as part of the Dunedin legend you can contact Sarah Gallagher by visiting www.dunedinflatnames.co.nz or tweeting @DNflatnames.