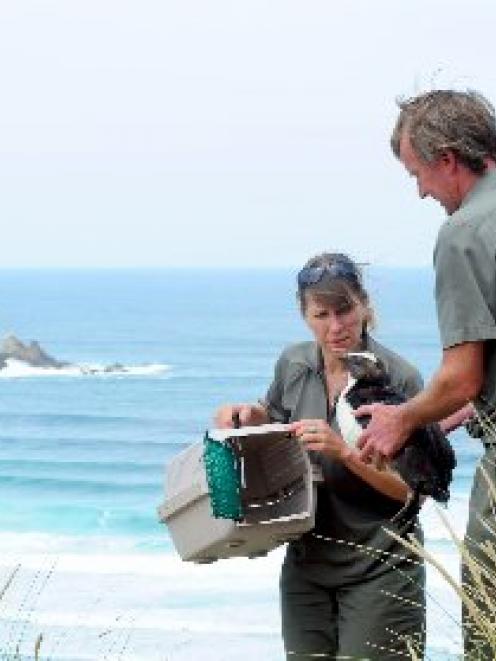 Department of Conservation community relations ranger Claudia Babirat and marine ranger Jim Fyfe prepare to release a Fiordland crested penguin at Sandfly Bay yesterday. Photo by Craig Baxter.
A Fiordland crested penguin starting its moult has been rescued from a beach at Ocean View, south of Dunedin - where it was at risk from dog attacks - and released at Sandfly Bay, on Otago Peninsula.

The Department of Conservation praised the member of the public who advised staff the penguin was on the beach and hoped more people would act the same way if they saw penguins in vulnerable positions in the next few weeks during moulting season.

Doc biodiversity assets programme manager David Agnew said moulting penguins were vulnerable, as they did not go to sea for three or four weeks until they had their new coat "in" and were waterproof.

They survived on their reserves during this time.

So, Doc, after ascertaining the Ocean View penguin was a good weight, decided to shift it to a safe place at Sandfly Bay, where it could moult in peace.

After yellow-eyed and blue penguins, Fiordland crested were the next most common penguins seen on Otago beaches, he said.

While they bred in Fiordland or the southern islands, they were often seen on the Otago coast during moulting.

They started moulting up to a month before yellow-eyed penguins, whose chicks were due to fledge in the next few weeks.

They would then begin to moult.

If the public notified Doc of vulnerable wildlife, staff would be able to remove them to a safer place, or if they were underweight or injured take them to a rehabilitation centre, Mr Agnew said.