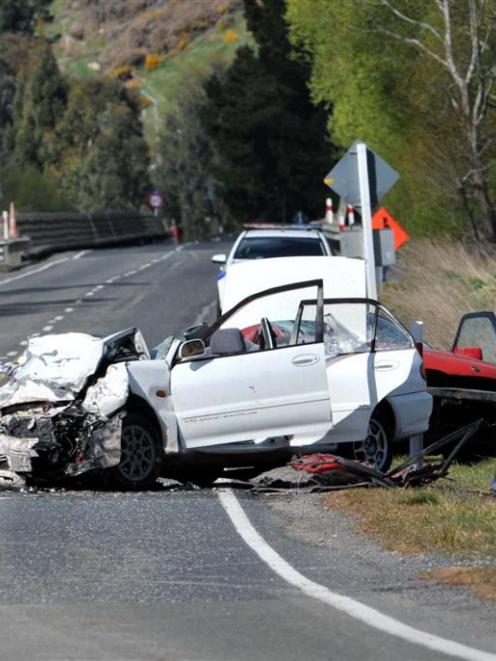 The scene of the fatal crash.
Police say the death of a driver at Allanton won't see them step up their monitoring of the weekly boy-racer "drag-train" convoy on the Taieri.

A 25-year-old woman remains in a serious condition after the collision on Centre Rd two Saturdays ago, in which 20-year-old Madison Luke Ford-Greeves (20) was killed. Both their passengers received moderate injuries.

Mr Ford-Greeves was not part of the convoy, but the other car, which the seriously injured woman was driving, was in the ''tail-end'' of the train.

Talked to this week, Dunedin police said most convoy participants were law-abiding, but some Taieri residents still wanted the ''antics'' of the convoy to be stopped.

''You've got four people, and all of their families and friends who are going to be affected for life.

''The drag-train just happened to be going past as [Mr Ford-Greeves] was going around the corner at a speed greater than recommended,'' Snr Sgt McDouall said.

The police regularly checked in with the Friday-night drag-train, he said, and in August had patrolled the convoy circuit on two consecutive weekends.

''We didn't find them too bad ... it is a continual tasking of the police to monitor them, but we don't want to put all our resources into one group of people because we have other work to do as well.''

Often a police presence was quickly communicated between those in the convoy.

''They've got each other's phone numbers on the back window, they know each other, they go driving every Friday night. They quickly communicate our presence.''

Most of the drivers in the convoy were not problematic, and drove legal vehicles, but all participants got ''tarred with the same brush'' due to the minority who broke the law, he said.

But some Taieri residents (those willing to comment did not want to be named) said they wanted the drag-train to bypass their towns, although some were resigned to it happening.

An Outram woman said she had become used to sleeping when the convoy passed.

''At the beginning, it was quite frightening - the noise - and it does still wake me up sometimes.

''If they do silly things around the corners, it is pretty scary,'' she said.

A Henley resident said cars had often ''burned their tyres out'' in Henley Rd for about 20 minutes and had left when police arrived.

''I think they have watch-outs when they do it, so it's very hard to catch them ... there is a number of cars, they do a few spins and then they disappear.''

It was hard for the police to catch them, when they communicated with each other about the police coming.

An Outram businessman said the convoy had always been a ''major nuisance'' with issues of speed and ''sustained loss of traction''.