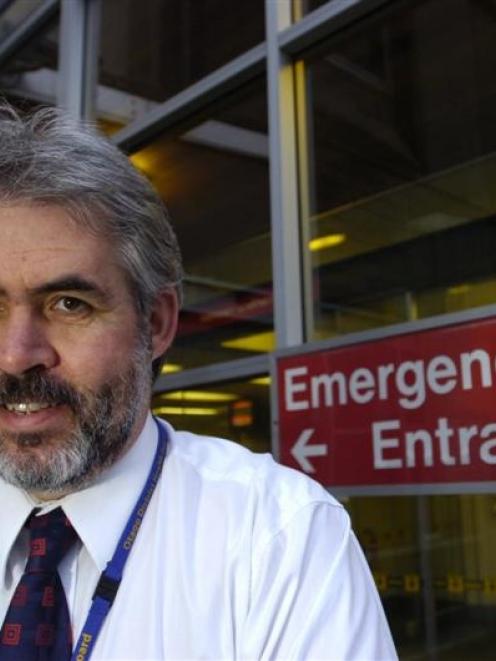 "The problem is quite fixable, but we've got to put some resources into it" - John Chambers
Dunedin Hospital's stretched emergency department needs an urgent multimillion-dollar makeover and more staff, department clinical leader Dr John Chambers says.

He is embarrassed the hospital lags behind others nationally on the requirement that patients should be admitted or discharged from the emergency department within six hours.

"Safety is absolutely a concern.

"That's why all clinicians believe in these targets set by the ministry [of Health].

"They mean something in terms of quality of care for patients."

While he supported "lean thinking" moves to reduce waste, he did not believe the department could make real headway without serious investment in facilities and staffing.

"The problem is quite fixable, but we've got to put some resources into it."

Dr Chambers would like to see a 20-cubicle acute admission and emergency ward with single rooms and en suite toilets.

Eight of these would be short-stay beds.

Such an arrangement would require an increase in both nursing and specialist staffing.

The department, built for $2.3 million in 1998, was "pretty humble" and unable to handle the number of patients seen.

A new doctor from Blenheim had pointed out there was a much bigger department there, even though it catered for fewer than half the patients.

Dr Chambers did not want the situation to reach the point where a serious incident prompted action, as had happened elsewhere.

Staff were frustrated that although the issue had been under discussion for years, little had changed.

Southern District Health Board chief executive Brian Rousseau said he was aware of Dr Chambers' view, but the board did not have the money and was in no position to ask for extra.

The board, which has an annual budget of about $800 million, has yet to get its district annual plan - with a forecast $14.9 million deficit - signed off by Health Minister Tony Ryall.

The Government had made it "very clear that they have no more money".

The board was limited to improving processes and efficiencies and/or diverting funding from another area of spending.

"We all know how difficult the latter option is, so we really do need to focus on improving our processes and efficiency."

Work was also being carried out to locate bottlenecks in patient flows.

Some investment might be needed to address these, but at this stage "we should not assume that they are occurring in the ED", Mr Rousseau said.

Mr Ryall, in an emailed response to questions, said he supported the view the board needed a stronger focus on the ED shorter-stays target and "that the rest of the hospital needs to buy into achieving that target".

The Government had already given Southern DHB (the previous Otago and Southland boards) nearly $50 million extra during the past two years to fund deficits.

"The best way to secure future services is to get future finances on a sound footing."

Dr Chambers said debate about the ED had been dominated for a decade by the "somewhat mythical" idea the difficulties were mostly caused by patients who could be treated elsewhere.

He estimated only 6% of patients fell into this category.

The pilot lean thinking programme carried out in 2008 had produced some gains, including a fast-track system for patients with minor injuries.

Dr Chambers made his comments after attending a national emergency department conference in Taupo last week with two of the board's senior ED managers.

If the department was to improve its performance by 25% by April 2011, it had to act immediately, he said.

All boards must meet the six-hour time limit for 95% of patients by then.

In the quarter to the end of June, Dunedin Hospital met it for 74% of patients.

Dr Chambers noted Waitemata District Health Board, ranked just above Otago, had recently signed off a $36 million upgrade with investment in an acute ward and increases in senior medical, nursing and support staff.