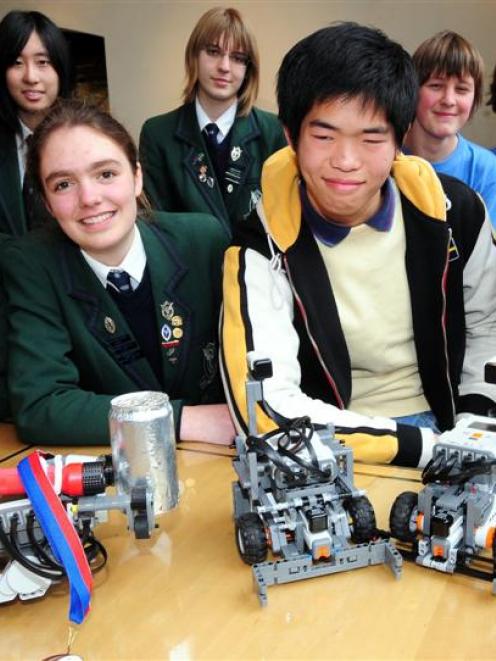 Vaughan Weatherall, Ben Liddell, Sam Paulin and Edward Law won the New Zealand RoboCup senior football competition at the weekend using nothing but the robots they built and programmed.

The team was delighted with the result.

Edward said it took two months to build the robots, but considerably longer to program them.

The task was to get the robots to detect a ball which emitted infrared light and hit it toward a goal using NXC programming.

"The programming never really stopped. We continued programming right up to the day of the competition."

More than 300 pupils from around the country met at Point View Primary School in Auckland to compete in the New Zealand RoboCup national final in which there were six categories: robotic dance (junior and senior), robotic search and rescue (junior and premier) and robotic football (junior and senior).

The competition is a science and technology-oriented, robotics education initiative sponsored by Toshiba and Modern Teaching Aids, and aims to further research and education in the field of robotics and artificial intelligence.

It was a successful day for Otago, as Columba College pupils Anna Fields, Amy Anderson, Lee White and Tunan Pan were third in the premier robotic search and rescue category.

Event organiser and football referee Harold Russ was impressed with the standard of programming used by the two Dunedin teams.

"Having refereed the Robocup football matches in Dunedin and again at the national finals on Saturday, I saw a huge improvement in the quality of the game that their robots were playing," he said.

"The girls from Columba College were finally confronted with a challenge that was worthy of their programming and design skills and I am sure they were an inspiration to many other female competitors, showing them that they can compete at the highest level."