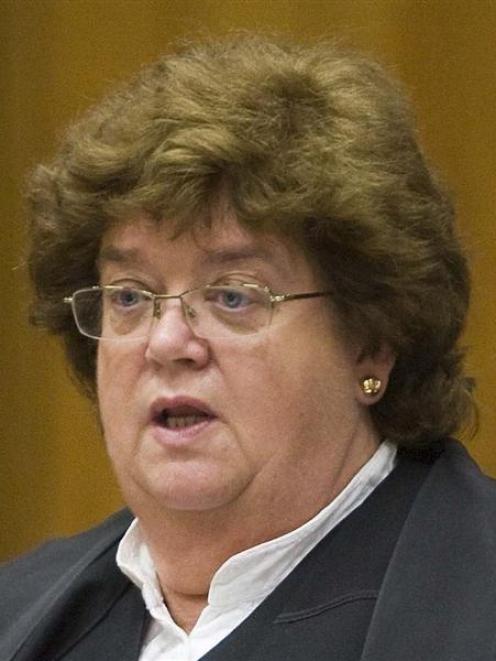 Judith Ablett-Kerr
The relationship between Clayton Weatherston and Sophie Elliott had been highly unstable and volatile and was detrimental to both of them, the High Court in Christchurch heard yesterday.

Cross-examined by defence counsel Judith Ablett-Kerr QC about some aspects of her daughter's life, Lesley Elliott agreed she had been concerned about the relationship initially because Weatherston was one of her daughter's teachers.

He took one of the papers she was doing for her economics honours degree dissertation and was also completing a PhD.

Mrs Elliott earlier told the court she had discussed the appropriateness of being in a relationship with a lecturer but her daughter had assured her Weatherston was going to "clear it" with the department.

Mrs Elliott also said the particular relationship was "very weird" and unlike other relationships Sophie had been in.

She explained this by saying there was none of the usual "starry-eyed" and loving behaviour which was normal at the start of a relationship, although Sophie and Weatherston obviously liked each other.

Her daughter was a very loving, cuddly girl "but I didn't see that in their relationship".

She could not say if Sophie was "keener" on Weatherston than he was on her and she accepted that, once the relationship had started, Sophie would have liked to have seen him more.

Her daughter would tell her it was as if Weatherston had two lives, one with her and one with "a whole set of other people she didn't know about".

Mrs Elliott agreed Sophie was "a great texter" and that she had complained about Weatherston not responding to her texts.

She had reminded her daughter that she and Weatherston were both busy with their studies and she should try and understand that.

Asked if there were difficulties over a former boyfriend moving on finding somebody else, Mrs Elliott said Sophie had wanted to remain friends with the young man as they had been going together for three years and had been good friends, but "he chose not to".

She was unsure if there had been "some unfortunate incidents" when Sophie went to the man's work to try and see him.

It had been her daughter's decision to leave the relationship and Mrs Elliott's assessment of the situation was "he was having difficulty with that and the only way he could deal with it was to have nothing to do with her".

Sophie had never mentioned striking him or scratching his face.

Initially, her daughter had not told her she had discussed Weatherston with her supervisor, Robert Alexander, a senior lecturer in the economics department.

Weatherston was concerned what Sophie had said would adversely affect his prospects of getting a lecturing job he had applied for, but her daughter's view was that Prof Alexander was only one of seven people marking Weatherston's PhD thesis, Mrs Elliott said.

She agreed Weatherston was obsessed over comparisons of his body image with that of another young man Sophie knew.

Sophie felt it was her fault.

When Sophie returned from a holiday in Australia in November, her mother thought the relationship with Weatherston was off - even though Sophie had told her she had phoned him, sent him postcards and bought gifts for him.

There was some communication between them because Weatherston invited her to some graduation-related functions.

Although her daughter thought it was inappropriate to go to one of the gatherings, she went to take the photographs.

And when she went to deliver the album of photographs on December 27, she was "definitely over him".

Mrs Elliott said she believed what Sophie told her about what happened at Weatherston's apartment that day, because "she was always very truthful".

She was very upset while talking about it, which was not like her.

"She had not been physically attacked before," Mrs Elliott said.

Asked about something recorded in Sophie's electronic diary about an "upset" between her and the witness, Mrs Elliott said she at no time said to Sophie she had "better be careful Clayton didn't find out" what she was really like.

She recalled it as a happy time when she was taking pictures of her daughter and Weatherston before they went to the PhD ball at Larnach Castle.

"I don't remember saying I could list some bad things about you but I might have. She's written it," Mrs Elliott said.