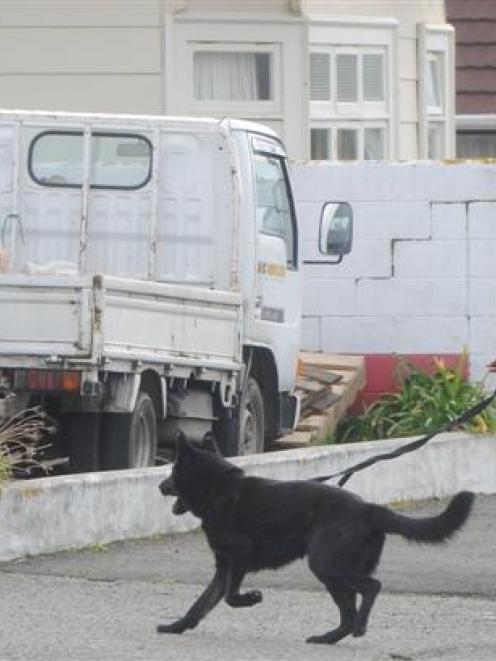 A police dog handler and his dog search for a knife-wielding man who threatened staff at the Sai Food Market in South Dunedin on Saturday. Photos by Craig Baxter.
A family who run a St Kilda dairy were left shaken after a man threatened them with a knife after entering their lounge connected to their shop over the weekend.

The man entered the Sai Food Market on Prince Albert Rd about 11.30am on Saturday, making his way behind the counter and into the lounge of their adjoining home where he produced a knife with a blade about 10cm long and repeatedly demanded money. 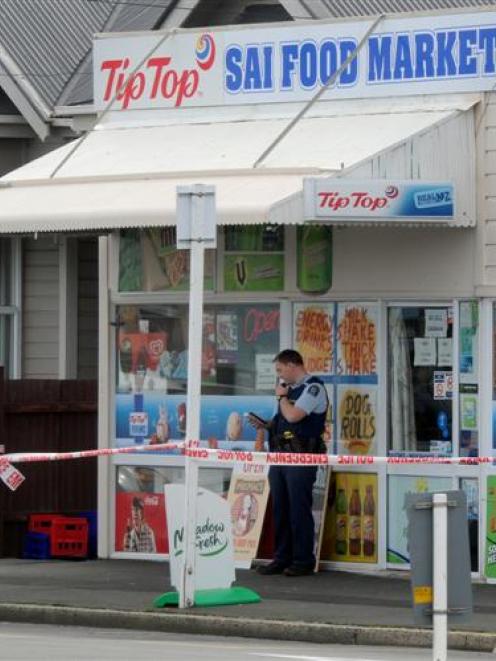 The cordoned-off dairy.
Pratik Patel, who was in the lounge with his parents Ashvin and Indira Patel when the man entered the shop, said yesterday the incident was "pretty scary".

He said the shop's buzzer rang about 11.30am and before his father could get to the counter the man had entered their lounge and was brandishing a knife.

"He showed the knife and said, 'Give me the money'." At that point Pratik Patel told the man to "open the till and take the money", but the man, not knowing how to work the till, asked for his help.

After telling the intruder how to open the cash register, the family retreated to their hallway, locked the door and called police.

Mr Patel said the man failed to open the till after pushing the wrong button and left soon after.

He said he thought the man was probably from the area and had been to the shop previously because of how quickly he entered their lounge.

The man came across as nervous as though it was his "first time" robbing a shop.

The family was unsure if anything was taken but cigarette packets were left lying on the floor, indicating a few may have been taken.

After leaving the shop the man was seen jogging away from it in the direction of Ascot Ave.

Senior Sergeant Tania Baron said after police were alerted they established a cordon, but were unable to locate the man despite a police dog being called in.

Police CIB staff were investigating and had conducted a forensic scene examination and taken witness statements, she said.

The offender is described as about 25 years old, 178cm-182cm tall, wearing dark clothing and using a scarf to cover his face.

Police believed the man was in the area for a short period before the robbery and were asking anyone who saw a suspicious person or vehicle about 11.30am to contact Dunedin police on 477-4000.