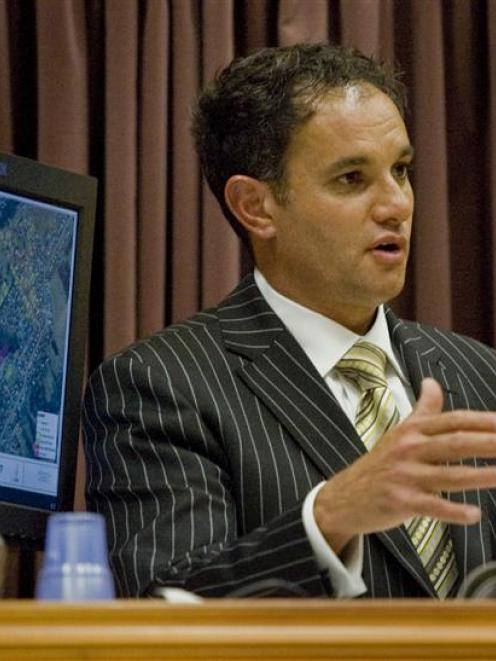 Former constable Laurence Peeters gives evidence on running the route of David Bain's paper round. Photo by John Kirk-Anderson.
Reconstruction of the bloody sockprints through the Bain family murder scenes occupied the 27th day of the murder trial of David Cullen Bain in the High Court at Christchurch yesterday.

Forensic testing on sockprints done with a 270mm size foot - the same size as his father Robin Bain's - after being soaked in animal blood and walking on carpet, was 282mm when tested with luminol, which indicates the presence of blood.

When doing tests with a 298mm foot - David Bain's was 300mm - the average size was 297mm, forensic scientist Kevan Walsh told the trial.

The bloody footprints found in the Bain house in Every St, Dunedin, were measured at 280mm.

David Bain is accused of shooting his parents and three siblings in June 1994.

The Crown alleges Robin Bain was shot when he entered the house, and a detective in the case has said the killer likely left the sockprints in the house.

The defence team told the court yesterday they had their own forensic scientist do measurements on a 300mm foot and their average prints measured 306mm.

None of their footprints measured less than 300mm with a luminol spray used on them.

In the original trial Dr Peter Hentschel told the jury that a foot of 280mm would make a smaller size print.

Mr Walsh told the court testing on David Bain's socks found blood on the toe, heel, ball, and instep of one of them.

He said there were heavy and light areas of staining.

When questioned by defence counsel Michael Reed QC, Mr Walsh said there was a large potential for error when using photographs to determine a likely firing distance for Robin Bain's head wound.

He was told that the first Crown pathologist to give evidence, Dr Alexander Dempster, said he had seen splitting of the skin, indicating it was a close contact wound but Mr Walsh said the tearing would be "quite significant" for a contact shot.

Yesterday afternoon, the trial moved on to Bain's paper round, which is central to the case as Bain maintains he was out on his run when the murder of his family occurred.

The critical issue is when he left on the run and when he returned.

If the Crown case is to hold water, he must have returned by the time a computer, on which the murderer left a message, was turned on in the house.

The Crown alleges the run was Bain's fabricated alibi, and says he had to complete it quickly to ensure he returned to the house before his father got up.

The defence alleges this was an absurd risk and a reason David Bain, now 37, is innocent of the killings.

The defence says David's father Robin killed his family and then himself while David was doing the paper run.

In a statement read to the court, Alister McConnell, now deceased but who was a distribution manager for the Otago Daily Times in 1994, said on June 20, 1994, he dropped bundles of papers at three different points on Bain's hilly run for him to pick up.

Bain had been doing the run for six years but sometimes his father or his sister Laniet did it for him.

He sometimes had to wake up David himself if David slept in.

He believed Bain must have started his run by 5.50am and would have finished between 6.30am and 6.45am.

On the morning of 20 June he had seen Bain's paper bag on the corner of Somerville and Everton Sts at 6.15am.

Bain would leave the bag there and take some papers by hand for deliveries in the steep Everton St, he said.

The corner is about half way, in geographical terms, on the run.

At 6am she went out to see if the paper had been delivered and was surprised to see it there so early.

She was one of Bain's first customers.

Stuart Warrington, another resident on the paper run, told the court he had left home about 6.05am and had seen David in the area he normally saw him.

A former constable, Laurence Peeters, who jogged the run to gauge how long it took, said he completed the route in about an hour.

The route was one of the hilliest in Dunedin and someone had to be very fit to run it.