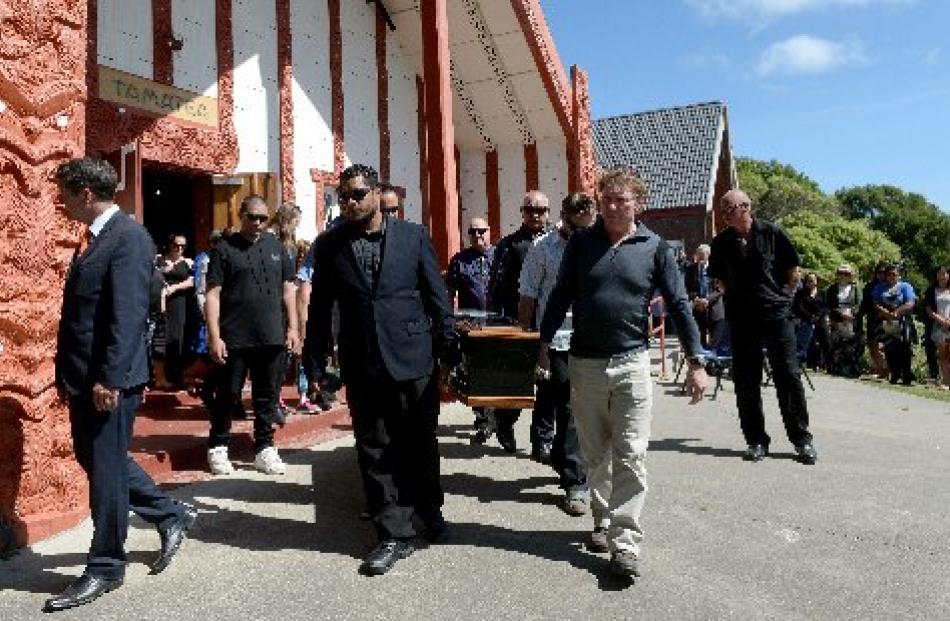 Solemn procession out of Te Whare Tamatea at a funeral at Otakou marae yesterday for Marty Taiaroa. PHOTO: LINDA ROBERTSON

The ‘‘chief of the Kaik'', Marty Taiaroa, was farewelled at Otakou marae yesterday.

Hundreds packed into Te Whare Tamatea and the marae's grounds to pay tribute and farewell the highly-respected member of Te Runanga o Otakou.

Mr Taiaroa (81) and close friend Jim Hansen (63) died when the fishing vessel they were aboard - MV Marina - was wrecked near Breaksea Sound in Fiordland last week. The funeral was punctuated by laughter as friends and family recalled anecdotes and memories of the man they called ‘‘Fearless Fred''.

‘‘He shot out of the van and started heading straight to the flagpole at full bore,'' he said.

‘‘This guy came up and said you can't do that.

‘‘I said ‘he's going to look at the flagpole'. He said ‘who's that?'. ‘He's the chief from the Kaik'. He went around and looked at Marty and came back and said ‘yeah, he looks like the chief'.''

‘‘He wasn't particularly political, but he was a leader and a chief,'' he said. ‘‘And it was more than our whanau that saw him as a leader.''

His nickname - ‘‘Fearless Fred'' - came from his calm and collected manner in any situation.

On one occasion Teone was fishing with his father off Pounawea when the boat overturned in the waves.

‘‘But I saw Dad tapping on the dash, saying ‘come up girl' and the next wave rolled us back over and he carried on like nothing happened.

‘‘He was never fazed about anything. He could keep his cool in any situation - nothing scared him.

‘‘He died doing what he loved. The only thing that actually scared him was dying in front of the TV with a remote in his hand and he didn't get to do that.''

Mr Hansen's sister, Lindall Hansen, spoke during the ceremony and thanked the Taiaroa whanau for their support.

Mr Hansen will be farewelled in Christchurch on Monday.