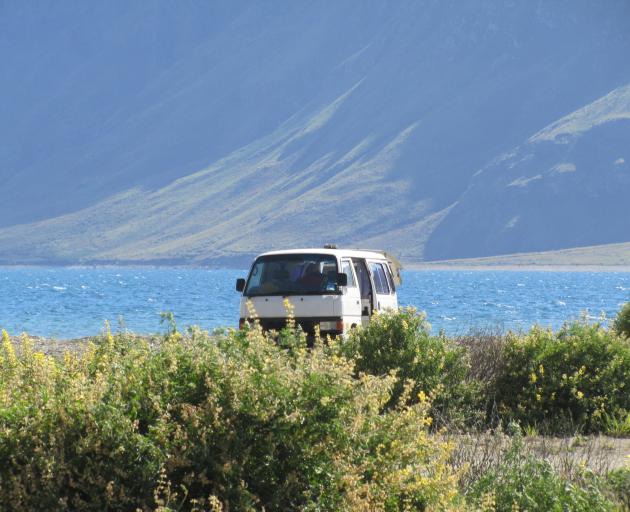 That is despite both the numbers of complaints about freedom campers (179, up 31%) and the number of infringement notices upheld (521, up 20%) increasing in Dunedin in the 2018-19 season, a report says.

The report was presented to Dunedin city councillors yesterday before an upcoming review of the Camping Control Bylaw 2015, which sets the rules for freedom camping in Dunedin.

Mayor Aaron Hawkins pointed out that although the overall number of complaints was up, the number of campers visiting Dunedin had also jumped, to about 30,000, in the 2018-19 season.

As a proportion of total freedom camping numbers, the number of infringement notices was therefore dropping "significantly", he said.

Council parks and recreation group manager Robert West told the meeting Dunedin was part of a wider trend, as there appeared to be a "huge drop" in infringement notices across much of the South Island.

That showed the messages being delivered to campers through word of mouth and digital freedom camping apps, asking them to follow the rules, use the facilities available and respect the environment, or risk a fine, were getting through.

"The general feedback is people are listening and complying," he said.

Cr Lee Vandervis was among those pleased by the trend, saying it was "great" to hear.

"It’s an awful lot of freedom campers, most of whom don’t seem to have caused any problems," he said.

Despite that, staff would review the Camping Control Bylaw, which was adopted in 2015 and reviewed in 2017 and last year.

That had led to improvements to address concerns about overcrowding at Warrington Domain and Ocean View Reserve, including the establishment of a new camping site in Thomas Burns St as a trial, which proved successful.

The Thomas Burns St initiative accommodated 35% of all freedom camping visitors, as Ocean View and Warrington numbers dropped by 41% and 36% respectively.

Mr West said one potential change likely to arise from the latest review could be to make the Thomas Burns St trial site permanent. It would still only be used for that purpose during the summer freedom camping season, rather than year-round, he said.

The council also needed to consider other changes to make the bylaw more "flexible", allowing the council to respond to rapid changes in freedom camping patterns in the city, he said.

The public would be consulted on changes, and the aim was to have a new draft bylaw ready for councillors to consider by April and in place before the next season began.

Councillors welcomed the report yesterday, including Cr Jim O’Malley, who was pleased to see Dunedin’s approach was "quite different" to that found in Queenstown.

The focus in Dunedin was on providing facilities to accommodate freedom campers, coupled with enforcement to ensure the facilities were used and rules followed.

"We have come a long way in three years."

Cr Steve Walker agreed, saying he was proud to be part of a council that was accommodating, rather than "vilifying", freedom campers.

"I think we should all be very proud to be taking that stance," he said.

No wonder everything works well with the 'freedom' campers as everyone is welcome - self-contained or not - and gets 5 star treatment and prime locations on ratepayers money! And the ones that should be self-contained BUY their self-containment certificate for a few bucks from corrupt inspectors (or how come the so popular Subaru station wagon can be self-contained...?). So much for the drop in fines and for 'quality' tourism.
We should start accommodating tourists for free in state houses...
...and shout them lunch and dinner at ratepayers expenses.

Unbelievable these lowlife camper's and what they get away with.. over crowded with tourists and we can still find a way to squeeze in a few more rejected hippies.