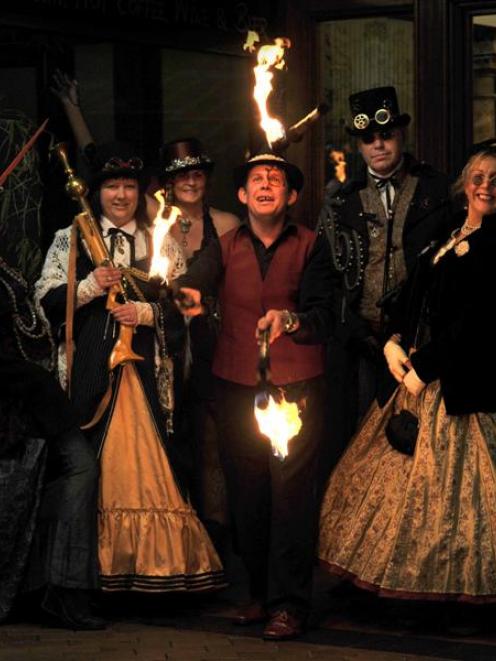 Fire-stick juggler James East welcomes steampunk ball-goers (from left) Fiona Rutland, from Auckland, Janet Mason, from Whangarei, Tania Taylor, from Oamaru, Mike Johnson, from Whangarei, and Sarah Rutland, from Akaroa, outside the Savoy in Dunedin last night. Photo by Jane Dawber.
Goggles, gold pocket watches, corsets and canes were some of the fashion accessories at the Grand Gadgeteers Steampunk Ball at the Savoy in Dunedin last night.

The uniform the 57-year-old wore was for escorting tourists on intrepid lunar safaris, he said.

"To take paying customers to the moon and back."

Kirsty Lewis-Bleakley, from Dunedin Steampunk group the Gasworks Guild of Gadgeteers, said the ball was a sellout and 110 people attended.

Steampunk was how Victorians believed people would be living in the future, she said.

However, the dress code was open to interpretation and could often be Gothic or post-apocalyptic, she said.

The ball was planned to go to the early hours this morning with live music, dancing, supper and a fashion show.

The informal fashion promenade allowed people to flaunt their fashion for prizes, she said.