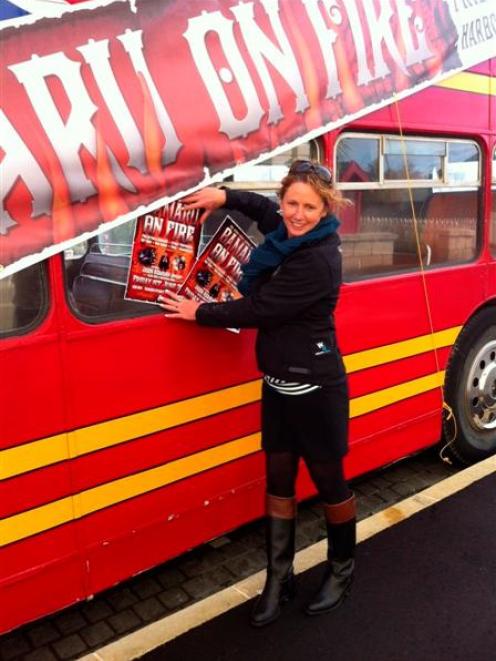 Tourism Waitaki event development officer Jan Kennedy secures a novel way of promoting the upcoming Oamaru On Fire event with a double-decker bus. Photo supplied.
Steampunk festival organisers say Oamaru will be in for a "very busy time" on the weekend of June 1, with the arrival of a second spectacular event for the town.

The fourth annual Steampunk event begins on June 2, but this year an additional event, the inaugural Oamaru on Fire show, will launch what promises to be a huge weekend for the town.

Tourism Waitaki event development officer Jan Kennedy said the event, which promised to provide a "fire, steam, sound and lighting spectacular", would be held in Harbour St on June 1 from 6.30pm-9pm.

With fire-eaters, jugglers, lighting display, pyrotechnic show and Opshop lead-singer Jason Kerrison also performing, it would be a night of entertainment for the entire family, Mrs Kennedy said.

Steampunk co-organiser Iain Clark said the Oamaru on Fire show promised to be a "fun night" and a "great overture" to the Steampunk festival.

The more entertainment visitors and residents had over the weekend, the better, Mr Clark said.

That was one of the reasons why this year the Steampunk event would take place over two days, rather than just one.

"We found that the people coming to Oamaru for the weekend found themselves a little short of entertainment, so we have elaborated a little more on the event.

"It was a celebration of the fact that there are a lot of creative people around, but also when given the opportunity, people rise to the challenge."

Steampunk would this year include live music, airship racing, short story readings, and a Sunday Gala Ball, he said.

The fashion show would also be more character-focused this year, with emphasis on the stories behind fashion show entries.

Fellow organiser HelenJansen said the addition of Steampunk-inspired short stories had already attracted contributions from both the Otago region and wider afield.