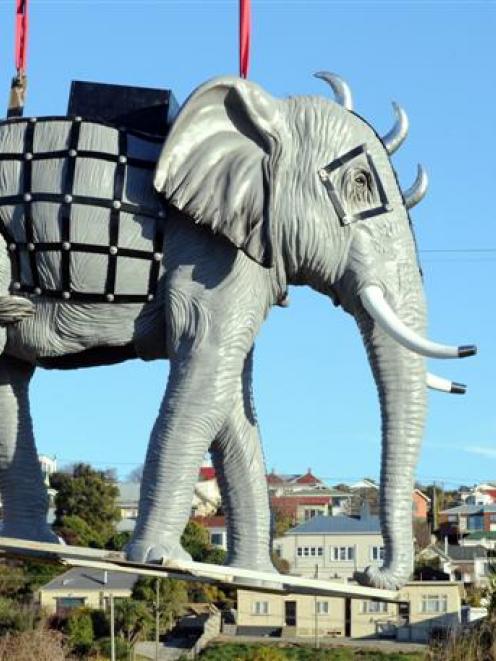 Photo by Stephen Jaquiery.
Eight tonnes of elephant flew into place yesterday at Oamaru Harbour, the second piece of a Steampunk-themed playground being created at Friendly Bay on a former carnival site.

Oamaru's elephant will become the end of a flying fox about 60m long, which will have its beginnings at a historic 1926 steam crane moved to the playground in November.

The elephant joins the giant penny-farthing swing - also designed and built by Mr Paterson - which was the first piece put in place in January.

Other features, including a crab pot with climbing frame and a restored fishing boat, will be added to the planned playground, estimated by the Waitaki District Council to cost $435,000.

The project is part of the Oamaru Harbour redevelopment.

Mr Paterson said it had taken about 14 months to build the elephant, made from fibreglass filled with reinforced concrete. A hole through its middle will feature a ladder so children can climb into a howdah, which will be added to its back, then slide down to the ground on a pole.

The flying fox, which it is hoped will be in place by next month, will appear to link the elephant by cable to the crane, making it look as though the elephant is trying to pull it.

It took about an hour to prepare the foundation and lift the elephant into place. It will be welded on to steel in a concrete foundation.