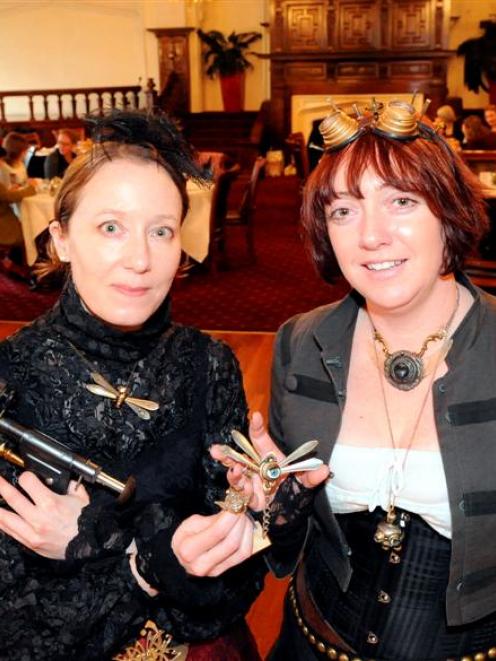 Kura Carpenter (left) and Kirsty Lewis-Bleakley, from Dunedin Steampunk group the Gasworks Guild of Gadgeteers, show off their Steampunk ray gun and Victorian envy jewellery at a Southern Heritage Trust afternoon tea at the Savoy Reception and Conference centre, Dunedin, yesterday. Photo by Linda Robertson.
The Southern Heritage Trust revisited the "elegance and nostalgia" of yesteryear with a Victorian Steampunk twist at the first of four afternoon teas to be held at the Savoy this year.

About 40 people donned their best clothes for yesterday's event where they had a traditional afternoon tea, using silverware from the original Savoy.

Heritage trust founding trustee Ann Barsby said the trust organised afternoon teas at the Savoy to honour what was once an important social tradition.

"The Savoy used to be the place to be seen and afternoon tea ... was a social event," Ms Barsby said.

The afternoon tea revisited the "elegance and nostalgia" of days gone by with three-tiered cake stands and china tea cups, she said.

Many of the people who came to the afternoon teas had fond memories of going to the Savoy with their parents when they were children.

Those who attended also listened to a presentation about Steampunk by Kirsty Lewis-Bleakley and Kura Carpenter, from Dunedin Steampunk group the Gasworks Guild of Gadgeteers.

Ms Lewis-Bleakley said the Savoy was a great place to show off her Steampunk jewellery and gadgets, as Steampunk was inspired by the past.

"[Steampunk is] essentially what the Victorians thought the future would be,"she said.