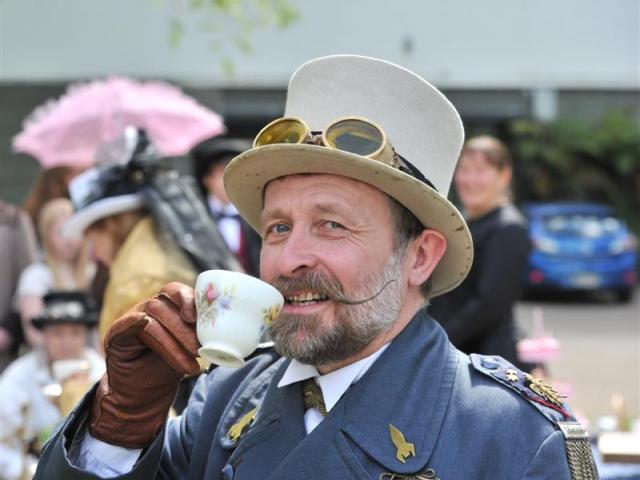 Peter Fleury, of Dunedin, otherwise known as Mortimer Merriweather the opportunistic safari guide, enjoys a cup of tea at a Victorian-themed picnic held by the Les Belles Vilaines dance group at the Otago Museum Reserve on Saturday.
Following a delay caused by last month's floods, the final items of equipment destined for the Friendly Bay Playground at Oamaru Harbour are expected to be lifted into place over the coming weeks.

Most of the events at the Steam Festival were sellouts and the celebration is set to return, organisers say.

Goggles, gold pocket watches, corsets and canes were some of the fashion accessories at the Grand Gadgeteers Steampunk Ball at the Savoy in Dunedin last night.

The Dunedin Gasworks Guild of Gadgeteers (rear, from left) Jackee Moore, Simone Montgomery, Norm Riley, Kura Carpenter, Kirsty Lewis-Bleakley, Fran Radley, and (kneeling, from left) Bradley Fairbairn, Peter Fleury and Sofie Welvaert dress in steampunk regalia for the official opening of the 2012 Steam Festival at the Dunedin Railway Station last night. They were among more than 100 people at the event.

Eight tonnes of elephant flew into place yesterday at Oamaru Harbour, the second piece of a Steampunk-themed playground being created at Friendly Bay on a former carnival site.

The Southern Heritage Trust revisited the "elegance and nostalgia" of yesteryear with a Victorian Steampunk twist at the first of four afternoon teas to be held at the Savoy this year.

The Oamaru Community Gardens will unveil a big sculpture on Saturday, thanks to an Oamaru guitar teacher with a passion for renewable energy.

Steampunk festival organisers say Oamaru will be in for a "very busy time" on the weekend of June 1, with the arrival of a second spectacular event for the town.

Work on a life-sized elephant for the Steampunk-themed playground at Friendly Bay is progressing well.

The League of Victorian Imagineers' third exhibition, called "Steampunk: Tomorrow as it used to be", was launched at a street party (above) outside the Forrester Gallery in Oamaru on Saturday night.
A small fishing boat which has worked out of Oamaru for years may come ashore permanently as a sandpit in a children's playground at Friendly Bay.

Weird and wonderful steam-powered machinery will be coming alive at the old gasworks if a handful of inventors get their way.

When an Australian school decided on a destination to see Steampunk, they chose Oamaru.

Steampunk is gathering steam in Oamaru. A fashion show and a gala ball this Sunday are set to exceed expectations and trump last year's inaugural events, and are attracting attention from throughout New Zealand.
They might not have won but the League of Victorian Imagineers spread the word about Oamaru and the steampunk phenomenon at the recent TrustPower national community awards.

The record-breaking Steampunk exhibition at the Forrester Gallery in Oamaru has attracted international attention, and organisers of a similar event in Melbourne want to borrow some of its exhibits.

Even steampunked belly dancers made an appearance at a steampunk street party in Oamaru on Saturday night.

A train from hell burst into central Oamaru yesterday morning, stopping traffic at the south end of Thames St.